We typically just roast a whole chicken in the slow-cooker or rotisserie style and make broth with the bones, but occasionally I’ll splurge on organic & free range chicken breast and this is one of my go-to recipes.

This is a mixture of chicken cordon bleu and baked chicken. I included instructions in the recipe for making this with loaded cauliflower (like loaded baked potato, but better!), so it is a complete meal in 2 pans and 1 hour! If you don’t want the loaded cauliflower, just leave off the ingredients starting with cauliflower. 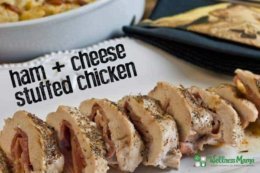 You can double or triple the stuffed chicken part of the recipe to have extra for lunches throughout the week.

What is your favorite way to prepare chicken? Tell me below!

How to Make Natural Floor Cleaner for a Healthier Home
Next Post: Natural (Homemade) Substitutes for Conventional Beauty Products