I don’t have much of a sweet tooth. When I want something sweet I’ll eat a piece of fruit or add a little honey to my tea. Actually, this berry crisp has both fruit and honey and is delicious without being too sweet.

And while there is nothing at all wrong with an unfrosted cake (it’s still delicious and a treat to eat), it doesn’t look very festive. When an especially fancy-looking cake is in order, frosting is a must. I created this mocha swiss meringue buttercream for that reason and it turned out perfect.

The most common type of frosting made by home bakers here in the U.S. is American buttercream. It’s just whisked together butter and powdered sugar (a LOT of powdered sugar) with a little vanilla extract. It’s super easy to make. And super sweet. I’ve made it occasionally, but it’s not my favorite.

This time around I decided to try something new and learn to make a Swiss meringue buttercream. I had heard that Swiss buttercream was fluffier and less sweet and wanted to give it a try. It was actually a lot easier than I thought it would be!

To make a Swiss buttercream I first had to make a Swiss meringue. If you don’t know, meringue is a fluffy egg white and sugar topping. Not difficult to make, just lots of whisking. I’d made Swiss meringue before because it’s what I use to top my sweet potato casserole.

To make Swiss meringue, you’ll need a double boiler. Now don’t go out and buy one unless you really want to! Chances are you can make one out of stuff you already have in your kitchen. Just find a glass bowl that will sit steadily on top of a medium-sized saucepan. Put a couple of inches of water in the bottom of the saucepan and put the bowl on top. Make sure the bottom of the bowl isn’t touching the water. Ta-da! Double boiler.

Next, combine egg whites and sugar (I like coconut palm sugar) in your double boiler bowl. Heat it until it’s warm, whisking once in a while. Then heat it up to 160°F while whisking constantly. The sugar should be melted.

Tip: If you don’t own a kitchen thermometer I highly recommend it. I use mine for temping meat, milk when I’m making yogurt, oil when frying, and sometimes baking/frosting making. Here’s the one I use.

Transfer the warmed egg white mixture to the bowl of a stand mixer and let it whisk until it has cooled to room temperature. You can put a bag of frozen peas or ice cubes around the bowl to make it go faster if you’d like. I usually just move around the house getting other things done while it does its thing.

Next, add the room temperature butter one tablespoon-sized chunk at a time until it’s all incorporated.

Last, add some flavor. Since this is a mocha buttercream I use chocolate and coffee. For the coffee part, I dissolve Four Sigmatic instant coffee granules into vanilla extract. For the chocolate part, I use melted chocolate chips melted to room temperature. At this point though, the buttercream can be flavored or colored any way you’d like, or be left plain.

I’ve gotta admit something to you all. I’m not the very best frosting maker in the world. I just don’t do it enough. Sometimes my experiments work out and I hit on something great and sometimes it’s a disaster. The flavors are always fantastic, it’s just the texture that’s a little wonky. For that reason, I haven’t had a lot of luck with ingredient substitutions. So if anyone knows better than me, feel free to chime in on the comments so we can all learn! 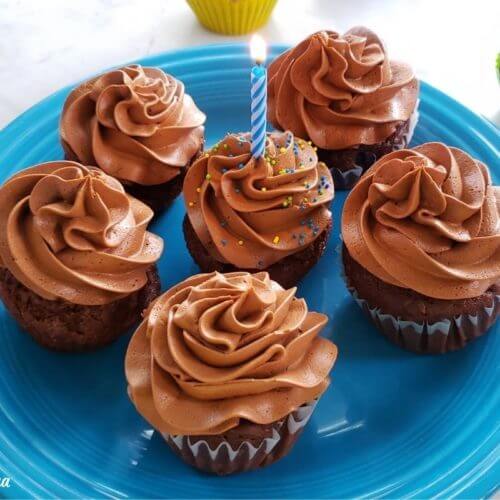 If you’re making this in advance and want to refrigerate it, let it come to room temperature before trying to spread or pipe it. If, after letting it come back to room temperature, the texture seems wrong, just give it a quick whisk.

Do you make frosting? I’d love to hear your tips and tricks.

How to Make a Peppermint Mocha

249: How to Harness Energy & Create Success From the Inside Out With Suzy Batiz of Poo~Pourri
Category: Dessert Recipes, Recipes