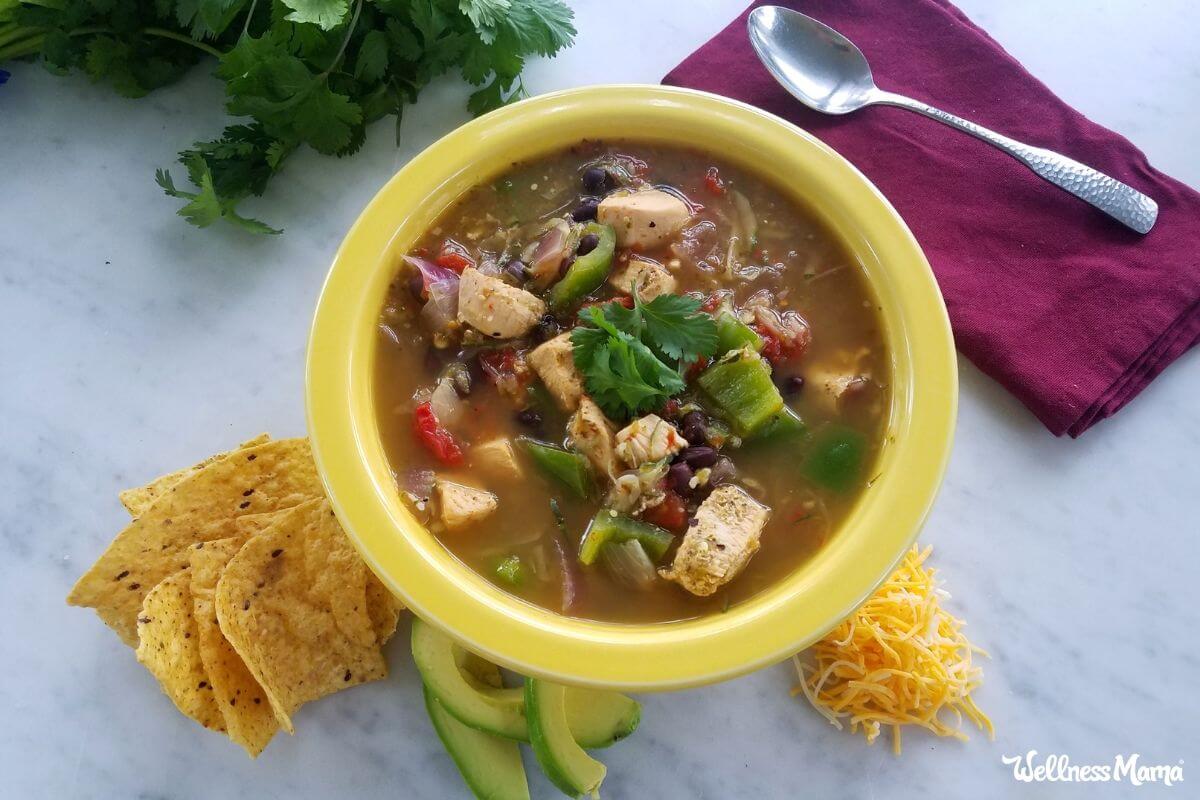 I’m a huge fan of soup. It’s easy to throw together, easy to freeze for later, and a healthy meal choice. My family also loves southwestern and Mexican flavors, so I created this chicken tortilla soup to meld the two.

I’m all about taking old favorite recipes and making them healthier. Luckily, soup is already a pretty healthy food and just needs a few tweaks. Here are some of the ways this soup can support optimal health.

Hot peppers are a great addition to a meal when you have a runny nose or other mild illness. The capsaicin in the peppers can ease pain and is also known to support the immune system.

Bone broth is also soothing to the digestive tract so it’s great for upset tummies.

Chicken tortilla soup wouldn’t be the same without the tortillas. But my family doesn’t eat grains (except for white rice occasionally), so I had to find a tortilla chip alternative. The chips I use in this recipe are made with cassava flour, so they’re also nut-free and safe for most people on an autoimmune diet. (And don’t worry… they’re extremely delicious!)

I don’t eat beans too often, but I know some people can’t eat a chicken tortilla soup without some beans. They’re easy to add in if you want them and are just as easy to leave out if you don’t.

This recipe calls for salsa verde as part of the broth. I love this salsa because it uses tomatillos instead of tomatoes for a slightly tangier taste and denser texture. If you don’t like salsa verde, you can use regular salsa instead. I also like this fermented salsa recipe because it adds beneficial bacteria and digestive enzymes to the meal.

I’m a big fan of one-pot meals, Instant Pot recipes, or other dinner ideas that make meal prep quick and easy (and if clean-up is short, even better!). This chicken tortilla soup recipe fits the bill.

It takes just a few minutes in the Instant Pot, so it can be ready to eat after a long day. You can throw it in the Crock-Pot in the morning and have dinner ready by the time everyone is home at night.

It’s also easy to freeze (just leave out the toppings until it’s reheated). Let the soup cool and measure 2 cup portions into a freezer container of choice (I like to use glass). Freeze for up to two months.

Here’s how to make it! 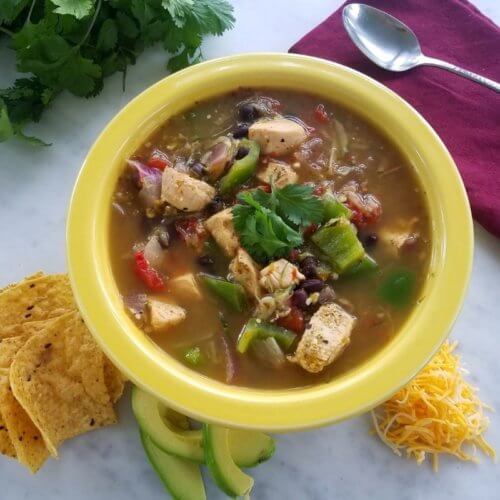 Easily make this in the Crock-Pot or on the stove using the same method as above, just simmer it until the chicken is cooked through. Cook time is about 4-6 hours on low for the Crock-Pot, or 20-30 minutes simmering on the stove.

My family loves southwestern flavors, so we include one of these recipes in our meal rotation regularly.

I love that Mexican and Southwest food is so simple, but full of flavor!

How to Make Natural Toothpaste
Next Post: How to Make Continuous Brew Kombucha