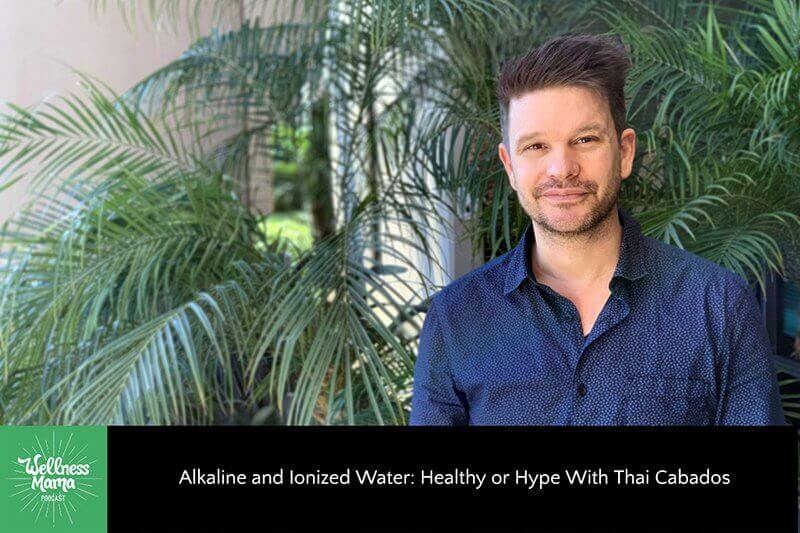 248: Thai Cabados on Health vs Hype of Alkaline & Ionized Water

Drinking clean water is one the most important things you can do for your health. I’ve written whole posts about the benefits of water and water filters, but my guest today is talking to us about an angle I haven’t covered yet: alkaline and ionized water.

For over 15 years, Thai Cabados he has been educating the public on the benefits of water and the alkaline diet. He even left his successful financial sector job to follow his dream and start his own business doing just that. He co-founded Alkaline Lifestyle, a website that incorporates alkaline water, alkaline diet, and mindfulness. Today we cover what the science says about alkaline water, how ionizing machines work, and why you might want to try one in your home.

Do you drink ionized water? Are there other questions about water quality you would like me to tackle? Please drop a comment below or leave a review on iTunes to let us know. We value knowing what you think and this helps other moms find the podcast as well.

This episode is brought to you by Branch Basics. They are one of my favorite companies because they are tackling two major problems with one simple solution. We’ve all heard about the problems with single use plastic and how they are polluting the environment, how overuse of plastics is bad for us as humans. And if you’ve read my blog, you’re also well aware of the potential pitfalls of harsh household cleaners, especially if you have kids in the house. Branch Basics helps on both of these fronts. They have the world’s safest non-toxic cleaning concentrate that is plant-based and biodegradable so it’s safe for the environment, as well as non-GMO and not tested on animals. Since it is a concentrate, a single bottle lasts a really long time which drastically cuts down on extra plastic bottles that you would get if you bought cleaners already pre-made. It’s gentle enough to be used on skin, even on babies, but strong enough to clean floors or greasy messes and even treat paint stains. And I use it to make an all-purpose cleaner to treat stains in the laundry and even use it as laundry soap. Their bottles are all reusable or you can do what I do and mix everything in reusable glass bottles instead. And when I say it is good for everything, I mean it! I carry a travel-size foamer pump when I travel for use as hand soap instead of using nasty soaps in bathrooms, and I use it as a face wash, shampoo, eye makeup remover, stain treatment, and so much more. I use the same concentrate at home to make practically every cleaning product in my home. You may have seen on my IG how I used their cleaning concentrate and oxygen boost to wash my white couches naturally. I use Branch Basics in some way every single day. Check it out and grab some of your own at branchbasics.com/wellnessmama and save 15% with the code MAMA15.

247: Dr. Jeff Knight on Vaccine Injuries, Autism, and Homeoprophylaxis
Next Post:249: Suzy Batiz on Harnessing Energy to Create Success From the Inside Out