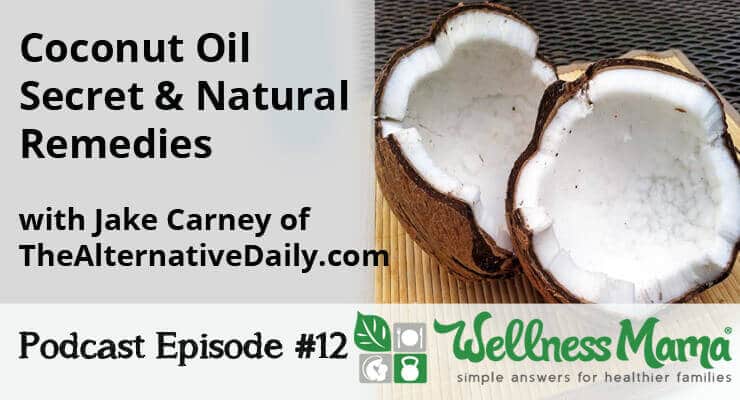 My post about 101 uses for coconut oil is one of the most popular posts on WellnessMama.com. I’m a huge fan of coconut oil and my family uses it for everything!

Jake Carney of TheAlternativeDaily.com joins me on this informative podcast to talk about the coconut oil secret, natural remedies and healthy fats.

Jake has an extremely popular book, The Coconut Oil Secret and you can get it at a discount by visiting this link.

In this episode, Jake and I talk about

2:03- How Jake became interested in alternative health
2:34- His big struggle that started at age 6
5:05- A tragedy in his personal life that was a catalyst for his own struggles
5:05- How his wife didn’t understand his struggle
5:15- What his doctor suggested and why he left his doctor’s office
7:35- What does everybody think?
7:54- How a surfing website helped him find answers
11:23- How TheAlternativeDaily.com got started
12:07- The free gift that had a huge impact on Jake
12:24- The site he will eventually start
13:30- When Jake started learning about natural living
15:05- How he first learned about coconut oil
16:56- What happened when he first started using coconut oil and why it made him sick
17:45- Why people looked at him strange
19:05- The drink you should never drink after noon!
21:20- An unusual use for coconut oil that I may or may not have tried
22:05- One thing you should NOT do with coconut oil
25:04- Is saturated fat bad for you?
25:50- The bad research against saturated fat
24:19- Is Saturated Fat causing heart disease?
25:36- Why coconut oil is not stored as fat and how you burn fat faster with coconut oil
28:21- Are trans fats really bad?
30:15- Why Jake doesn’t like Whole Foods
30:24- The problem with cottonseed oil and the nasty step in its manufacturing
32:10- His favorite natural remedies.
35:00- The 80/20 principle of green smoothies
36:01- The controversial part of health
40:26- Personalization

Thanks as always for listening. Just a reminder, you can get a discounted copy of The Coconut Oil Secret at this link.

Please subscribe to the podcast via iTunes or Stitcher to get every episode downloaded automatically on your phone and I’d be really appreciative if you’d leave a rating or review.

What is your favorite use for coconut oil? Share below!

011: Bo Eason on How to Foster Success in Your Children
Next Post:013: Dr. Pedram Shojai on Vitality & Healthy Children