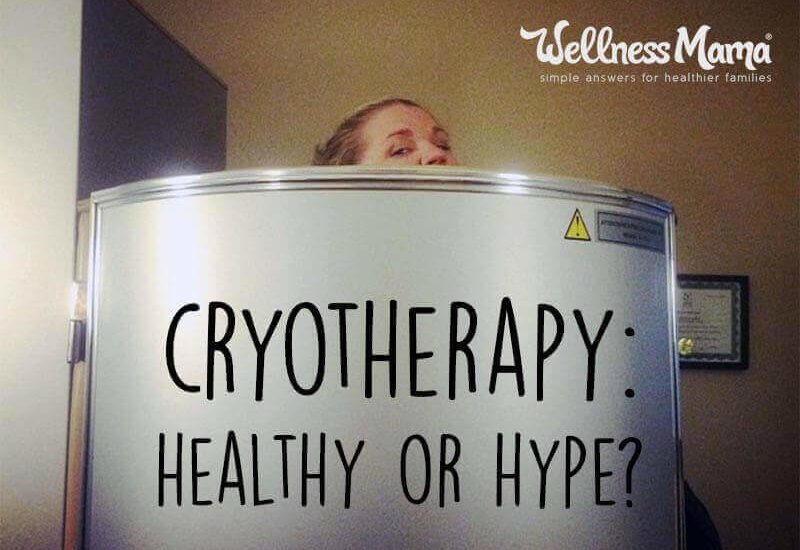 If you live in a big city or follow me on Instagram, you may have heard of cryotherapy.

If you haven’t, it is essentially the process of using really low temperatures for medical therapy. This could mean something as simple as sitting in a cold tub or ice bath or using ice on a wound. Recently a new kind of cold therapy has emerged and it involves getting into a body-sized chamber up to your neck and having liquid nitrogen sprayed into the air to bring skin temperature down to below -200ºF.

I didn’t think so either at first, but the benefits are intriguing and the cryo-chamber  (also called a cryosauna) was much more bearable than an ice bath, in my opinion.

Cryotherapy is essentially the process of using cold temperatures for their health benefits. This form of therapy has been used in different ways since the 1700s to decrease pain and muscle spasms, improve recovery, slow cell aging and improve health.

Athletes have been soaking in cold tubs and ice baths for decades, but recent innovation now allows for whole body cryotherapy (WBC) in a specialized chamber using liquid nitrogen and is the form most often referred to in modern references to Cryotherapy.

This type of cold therapy was invented in the 1970s in Japan, and has only come to the US and other countries in the last decade. It has gained widespread popularity with athletes and those with certain chronic illnesses (as well as housewives who don’t like ice baths *ahem*).

As you might imagine, this therapy has its share of claims to its benefits, as well as its fair share of skeptics and risks. So what is the real story? I decided to get down to -240ºF  and investigate.

Articles about WBC claim that it can help with everything from minor inflammation to autoimmune disease and everything in between. It is important to note that Cryotherapy itself has been used in some form by the medical community for hundreds of years and is well documented.

Any of these are essentially a form of “cryotherapy” but recent references more often refer to WBC or “cryosaunas,” which are fascinating but less well-researched. Tony Robbins claims to use a cryogenic tank daily as part of his daily routine and other celebrities have jumped on the bandwagon as well, but let’s look at the research.

Some of the benefits often attributed to cold therapy are:

This claim seems to be well supported, both anecdotally and in studies. Athletes have known for hundreds of years that ice seems to help speed recovery and WBC is a fast way to get the benefits of cold to the entire body.

Some studies show that WBC is effective against delayed onset muscle soreness (DOMS) in athletes, however a meta-analysis of studies didn’t find the same results and questioned the validity of earlier studies. (1, 2, 3)

Many athletes and celebrities from Kobe Bryant, to Jessica Alba and even basketball players from the Dallas Mavericks claim to have noticed benefits from cryotherapy, and the rapidly growing popularity of these “Cold Saunas” indicates that many others might notice the same results, though science doesn’t seem to understand how or why WBC reduces soreness yet.

Another benefit often attributed to cold therapy is an immune system boost and the research here is divided. The theory is that the rapid exposure to extreme cold triggers the hypothalamus to switch on anti-inflammatory processes within the body. Dr. Kruse recommends cold therapy for improving leptin levels, which has a proven connection to improving immune function. (4)

It isn’t clear whether or not 3 minutes at temperatures below -200ºF are enough to trigger the same leptin benefits as ice baths and the more well-studied methods used by Dr. Kruse, though further research may shed more light (or cold!) on this topic.

Another theory is that three minutes of such intense cold is enough stimulation to make the body think it is in a survival situation and to ramp up the normal immune process in the body. This is also less researched and the link is unclear, though I found dozens of cases of people who swear by it for an immune boost.

Personally, I haven’t tried it enough to know one way or the other if it helped me, but I did notice this next benefit…

This is the benefit I noticed immediately and for several days after my cryo session. After just three minutes of intense cold, I felt like I could run a marathon. I had a ton of energy, was more mentally alert and I felt great! This is likely from the release of catecholamines (adrenaline and noradrenaline) as well as other neuro-peptides in reaction to the cold. These neuro-chemicals are associated with a feeling of euphoria and are the reason you might find yourself laughing out loud when you jump into cold water or run out in the snow without adequate clothing.

Of course, my experience is purely anecdotal and doesn’t include any scientific proof, but it is something I would do again just for the mental and energy boost.

Another claim often associated with WBC is the metabolic effect of “burning 800 calories in 3 minutes.” I couldn’t find any studies to back up this claim, though I also couldn’t find any evidence that cryotherapy was harmful. There is research that indicates that cold therapy (specifically immersion in ice water) can ramp up the metabolic rate by over 300%, though this same research has not been done specifically on cryo-saunas and the air version of this method. (5)

This is another benefit often associated with cold therapy but not entirely well-studied. Of course, this doesn’t necessarily mean it isn’t effective. We’ve probably all used cold therapy (ice) for inflammation (injury or bruise) at some point in our lives without looking for scientific research before doing so.

Doctors have used cryotherapy in clinical settings to help with inflammatory conditions like rheumatoid arthritis (RA) and chronic pain conditions. Cold seems to have both short and long term benefits against chronic pain and can also make other therapies more effective and better tolerated by the patients. (6)

As you might imagine, stepping into a sub-zero chamber does come with a few risks, though surprisingly not as many as you might expect. The only cases of injury or harm I found were when someone wore damp clothing inside the chamber and contracted frostbite and the death of one cryo-sauna employee from using the tank alone after work hours without a trained technician running it for him.

Since WBC is done for a very short amount of time in a controlled environment, the potential for risk may actually be lower than when doing immersion therapy in cold water. Of course, pregnant women shouldn’t try this, and anyone with a health condition should check with a doctor before attempting this or any other therapy.

WBC is currently unregulated and not extensively studied so we may continue to learn more about the benefits and risks as more research is done.

Research is still emerging about this type of cold therapy. While the benefits of cold therapy and cold thermogenesis are well-supported, we don’t seem to know yet how WBC compares or if it has the same long-term benefits, though the anecdotal evidence and initial studies are promising. Like most things in life, WBC carries risks if done incorrectly, but may have many benefits if done correctly.

For me, it was worth trying for the boost of energy and mental clarity that lasted several days after my session and it is something I will definitely try again.

What are your thoughts? Have you tried it? Would you go 200 degrees below zero?

12 Uses for Liquid Castile Soap
Next Post:How to Get Rid of Ants Naturally