It turns out that after all the childhood fear and drama about organ meats, they are actually good for you. If you aren’t already eating liver, you should be!

The objection I get most often (including from my mother-in-law) is that liver is the filter organ, so it contains toxins from the body and is bad for you. Liver is a filter of sorts, but that is hardly the whole story. As Mark’s Daily Apple elaborates:

To call the liver a simple filter is incorrect. If we want to maintain the metaphor, it’s more like a chemical processing plant. The liver receives shipments, determines what they contain, and reacts accordingly. It converts protein to glucose, converts glucose to glycogen, manufactures triglycerides, among many other tasks, but its best-known responsibility is to render toxins inert and shuttle them out to be expelled – usually in the urine via the kidney. It doesn’t just hang on to toxins, as if the liver is somehow separate from the body and immune to contamination. The liver is part of the body! If your liver contains large amounts of toxins, so do you!

Okay, so we’ve established that the liver is a processing plant by design, rather than a physical filter whose express purpose is to accumulate toxins, but what about animals raised in industrial, intensive operations? The liver from a pasture-raised cow with a perpetually cud-filled maw can undoubtedly handle its relatively light toxic load; the liver from a CAFO-cow feeding on grain and exposed to environmental pollutants is surely another matter entirely. Right? Sorta, although it’s more complicated than that.

From my research, as long as the liver is from a healthy source, it is a powerhouse of nutrients. (Note: We get liver from Grassfed Traditions and US Wellness Meats)

Why eat liver? WAPF sums it up well:

“Quite simply, it contains more nutrients, gram for gram, than any other food. In summary, liver provides:

It also blows any other “superfood” out of the water on nutrient comparison. Don’t believe me? Check out this post.

Convinced? If you are new to offal, I suggest an easy recipe like this one to help get over any *ick* factor: 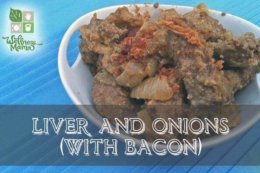 Liver and Onions (with Bacon) Recipe

If desired, you can sprinkle the onions with additional spices before adding the butter.

Do you eat liver? Love it? Hate it? Share below!