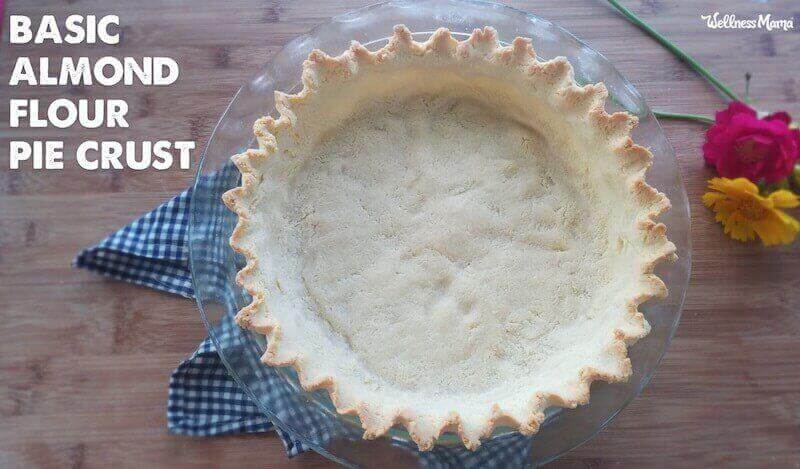 A delicious (and reliable) pie crust recipe is essential in every kitchen. Even better if it’s grain free and paleo! I often go crustless for recipes like my bacon and broccoli quiche, but for some recipes, a pie crust is important.

I recently realized that I although I have several pie recipes with crust, I hadn’t shared my standard pie crust recipe on the blog… so here it is!

I wanted to create a pie crust recipe that was grain free and dairy optional. I decided to use almond flour as the base because it has a nice crunch and flavor when baked.

The dough for this pie crust is the press in kind, not the roll out kind. And honestly, pressing the dough into the pie plate is so much easier than rolling it out and trying to successfully fit it into the pan. If you make a hole or the dough is too thick in one spot, just smoosh it to another spot!

I like to use a food processor to make this crust, but it also works perfectly with just a bowl and a fork.

One note about this recipe: It makes a very good basic pie crust that’s perfectly tasty for any pie, but you can customize it too. If I’m making a sweet pie, I’ll sometimes add a little honey. If I’m making a savory pie I might add some herbs, such as my Italian seasoning.

I use this basic almond flour pie crust recipe for the following recipes, but add an extra ingredient or two to each to adapt it for each pie.

If the pie recipe you are using this crust for requires a long baking time, you may want to cover the edges of the crust with strips of foil to prevent over-browning them. Assemble your pie of choice, top with a dollop of coconut whipped cream... and done!

What’s your favorite gluten-free pie crust recipe? I’d love to hear about it!