As far as healthy dessert recipes go, this is an overall winner! I make these glazed donut holes are made with healthy ingredients, but the taste is very similar to old fashioned donut holes. They are a fun choice when you want something decadent and want it to be nutritious too. They’re perfect for a special birthday breakfast (served with healthy protein) or a dessert that’s easy to pack in a picnic.

Let’s say this much… as donuts go, these are as healthy as they come!

It’s not clear exactly how donut holes came to be, but one interesting story starts with a mother and son team. In the mid-19th century Elizabeth Gregory, mother of New England ship captain Hanson Gregory, created the doughnut when she fried dough with nuts in the center where the dough might not cook through. She rolled them in nutmeg, cinnamon, and lemon rind.

Captain Gregory used the top of a round tin pepper box to cut a hole in the doughnut, and the donut hole was born… or so the story goes.

Today, doughnuts are shaped by machines (and donut holes are no longer cut from the center). But the popularity of donut holes hasn’t wavered and they are now made separately.

I’m going to go out on a limb and say… donuts can be healthy! Eating a lot of sugar (natural or not) isn’t a healthy habit, but having an occasional treat made with healthy ingredients is perfectly okay. These donut holes have some sugar (from the chocolate chips and glaze) but not nearly as much as other donuts.

To reduce the sugar even more, skip the glaze.

It’s amazing how many baked goods and other recipes can be made with alternative flours including almond flour. But at the same time, there is a learning curve when you begin baking with new flours and ingredients. Here are some tips for tasty donut holes using healthy ingredients:

Because baking with alternative flours can be tricky, it may take you a bit of time to figure out how your oven, pans, and recipes work together. Don’t be discouraged though… the learning curve is worth it! Soon you’ll be making beautiful donuts that taste great and fill kids up with healthy fats and fiber. 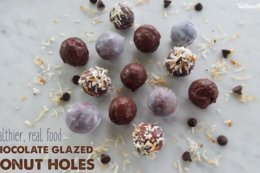 To make the donut holes:

Ever made healthy donuts? Ready to try this delicious recipe? Share below!