Wellness Mama » Blog » Natural Home » Himalayan Salt Lamp Benefits: Facts, Myths and How to Use Them

There are few things in life as soothing and relaxing as the warm glow of a campfire, and a Himalayan salt lamp offers a similar ambiance at home.

I’ve talked before about how I use them to help keep the air fresh and for their soothing red glow. Salt lamps have exploded in popularity over the last few years, along with some explosive claims about their benefits. In this article, I’ll break down the well-studied benefits, the anecdotal ones, and why everyone seems to love these lamps!

TIP: If you’re just looking for a high quality salt lamp for your home (and don’t care about the science), I have this one on my desk right now and love it.

What is a Himalayan Salt Lamp?

Salt lamps or HPS (Himalayan Pink Salt) lamps are large pieces of pure Himalayan Salt with a small bulb inside. They can be solid pieces of salt (like this one) or decorative baskets filled with large crystals of salt (like these). They offer a nice warm glow when lit and may be beneficial for indoor air quality.

Himalayan salt lamps are made from pure, food grade, Himalayan salt crystals. True Himalayan Salt comes from the western side of the Himalayan Mountains in the Punjab region of Pakistan. Once mined, this salt is hand carved into lamps or powdered to use as salt in recipes.

Why is Himalayan Salt Pink?

Regular table salt is primarily just sodium chloride. Himalayan salt is still about 98% sodium chloride, but also contains trace minerals like magnesium, potassium, and zinc. Trace minerals give salt lamps their hue, which can range from light pink to a dark orange/pink.

These beautiful lamps gained massive popularity recently and there are many benefits attributed to them.

But are these benefits actually backed by science?

How Does a Himalayan Salt Lamp Work?

Good question! We know the body needs salt for things like hydration, electrolyte balance, proper blood pressure regulation and for the nervous system. But all of these benefits come from consuming the salt internally (which I also do).

Most of us aren’t eating our salt lamps so the benefits come from another property of salt. Salt is naturally hygroscopic, which means it attracts water molecules to itself. The theory goes that salt lamps attract water molecules in the air.

Since water in the air can also hold allergens, pollutants and even bacteria, these substances get attracted to the lamp too. The heated salt lamp supposedly dries out the water vapor, leaving the particles attached to the salt. For this reason, many sources recommend wiping down the salt lamp with a cloth a few times a week to clean it.

Other sources claim that Himalayan salt lamp benefits are due to the creation of negative ions.

Many sources claim that salt lamps are natural negative ion generators, although there are some important points to understand:

What are negative ions?

At any given time, there are both positive and negative ions in the air. As a flashback to freshman science class:

Negative ions occur more often in nature and they are often created by things like lightening storms, sunlight, waterfalls, and ocean waves. Running water is considered nature’s greatest source of negative ions and may be one of the things that contributes to the refreshing scent of waterfalls and the beach. In fact, this is one of the reasons people often report feeling renewed or refreshed after a storm or after spending time at the beach.

WebMD explains some of the benefits of negative ions in the air:

Generally speaking, negative ions increase the flow of oxygen to the brain; resulting in higher alertness, decreased drowsiness, and more mental energy,” says Pierce J. Howard, PhD, author of The Owners Manual for the Brain: Everyday Applications from Mind Brain Research and director of research at the Center for Applied Cognitive Sciences in Charlotte, N.C.

“They also may protect against germs in the air, resulting in decreased irritation due to inhaling various particles that make you sneeze, cough, or have a throat irritation.”

And for a whopping one in three of us who are sensitive to their effects, negative ions can make us feel like we are walking on air. You are one of them if you feel instantly refreshed the moment you open a window and breathe in fresh, humid air.

Short answer: Yes. But not in large amounts.

Spending time in nature, especially around water, is definitely the best way to get exposure to negative ions, but salt lamps also generate small amounts, especially when used consistently over time.

Since positive ions are often created by electronic devices like computers, TVs, microwaves, and even vacuum cleaners, they can often exacerbate problems like allergies, stress and sleep trouble. Negative ions can neutralize positive ions (they bond together) and help cleanse the air. Additionally, salt lamps offer a soothing glow that many people find relaxing.

As I said above, all salt, by its nature, is hygroscopic, meaning that it attracts water to its surface. In a Himalayan salt lamp, this water evaporates quickly due to the small amount of heat from the light source (this is also why salt lamps tend to sweat and appear wet in humid climates).

Small amounts of water vapor is present in the air and can carry things like mold, bacteria, and allergens. Salt lamps attract this water vapor and those items it carries to its surface and removes them from the air. When the water vapor evaporates, this MAY generate a small amount of negative ions.

The theory that salt lamps generate negative ions is not tested or well studied. That said, it is likely that due to the hygroscopic nature of salt, these lamps have a positive effect on air quality.

The Benefits of Himalayan Salt Lamps

Salt lamps may not be the negative ion generation panacea they are made out to be, but we have them in many rooms of our house for other reasons: 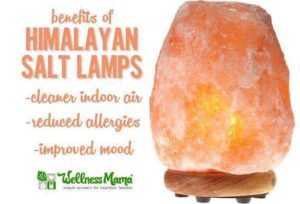 Research has shown that different colors of light affect the body in different ways. My own doctor recommends avoiding blue light after sunset because it can interfere with circadian rhythm and disrupt sleep hormones.

Unfortunately, many modern light sources like cell phones, tablets, computers, and TVs emit a lot of blue light and many of us spend a good majority of time staring at these screens, especially in the evening.

Salt lamps, on the other hand, offer a warm orange glow, similar to the orange hues found in a campfire or by candlelight. For this reason, they are a great light source for the evening and can even be used as a night light without negatively affecting sleep.

I often wear orange sunglasses at night if I’ll be on the computer or watching a movie to avoid blue light, and we use mostly salt lamps and other low and orange lights after dark for mood lighting.

As mentioned, salt lamps are not a spectacular source of negative ions. However, due to their hygroscopic properties, they may improve the air in other ways. Besides offering a soothing glow, they can attract pollutants in the air and even help neutralize the effects of electronics.

These soothing lamps may also help boost mood and energy levels, especially for those with Seasonal Affective Disorder (SAD). The soft orange hues are one of the soothing colors often used to calm mood and increase focus. The small amounts of negative ions may also be helpful in boosting mood as well. But, if you’re looking for the benefits of the negative ions, spend some time outside instead!

My brother-in-law has struggled with asthma and allergies for much of his life and he found relief after using a Himalayan salt inhaler. Others notice a difference from having salt lamps in their homes or offices. I haven’t found any studies that have looked into why, but the anecdotal evidence is strong from allergy sufferers.

How To Choose a High Quality Salt Lamp

It is possible to buy machines that create negative ions, but I’ve found that spending time outdoors and having salt lamps around the home indoors are less expensive alternatives that offer other benefits as well.

We have salt lamps in most rooms in our home and enjoy them in winter months when it isn’t possible to have the windows open or to spend as much time outside. We now have a solid salt lamp and a basket lamp in several rooms of our home and I love them for their ambient glow and orange color.

Salt lamps cost less than many other types of lamps, and a high quality one can last for decades.

If you are interested in adding a salt lamp to your home, choose ones with these features for best quality:

These are a few of the Himalayan Salt Lamps I’ve tried that meet these criteria:

Salt lamps aren’t a panacea and they don’t take the place of a quality air filter. They don’t create large amounts of negative ions like you’ll find in nature, especially around water. If negative ions are the goal, taking a hike or a swim in nature is a much more efficient way to get them.

Himalayan salt lamps are a beautiful light source that may offer the benefits of color therapy, by cleaning the air hygroscopically and in alleviating allergies. They are an inexpensive no-blue light source to use after dark and as a sleep-friendly night light for kids.

At the end of the day, they aren’t going to fix any health problems on their own or drastically improve indoor air quality. They are, however,  a beautiful and eco-friendly light source that produces a healthy spectrum of light. If you are choosing lamps for your home, they are a great option to consider. 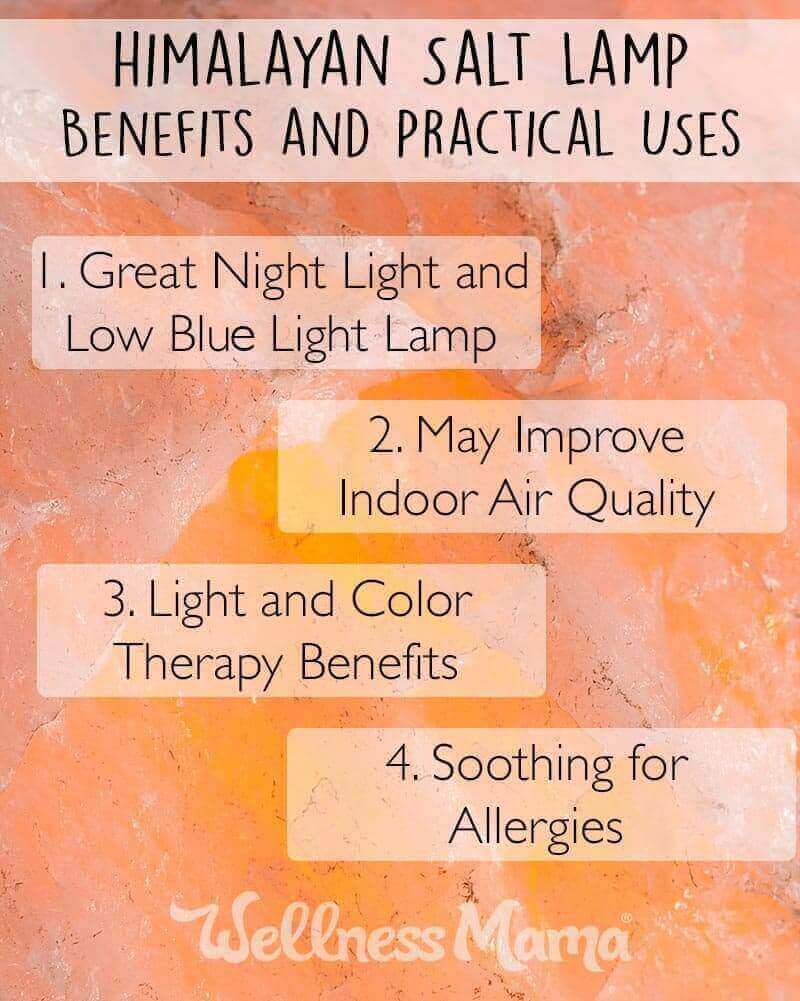 Other Ways to Use Himalayan Salt

Ever used a Himalayan salt lamp or other air filter? How do you like it? Tell me below!

Why Do Gardeners Live Longer?
Next Post: 10 Amazing Uses for Diatomaceous Earth Around the Home