As many of you know, I’ve had six children in nine years. I’m certainly open to having more children in the future, but I feel like my body would benefit from a break from pregnancy/nursing, especially as I am working to overcome my autoimmune disease and heal my thyroid.

I’ve written before about why I choose not to use hormonal or artificial contraceptives and what I use instead. I explained in that post:

Personally, the mere possibility that conception could occur and then the fertilized egg could be prevented form implanting is enough to keep me from ever wanting to use hormonal contraceptives.

Problems With the Pill

Artificial hormones like those found in hormonal contraceptives aren’t good for Mom either (or the water supply for that matter).

Doing the math, this means a woman who takes the Pill for even just two years before the age of 25 and before she’s had a pregnancy to term increases her risk of breast cancer tenfold.

As I’m not personally a fan of increased cancer risk, and I’m also not a fan of altering my hormones with artificial means. For these reasons I’ve used alternative methods to track my fertility.

How to Test for Fertility

A woman is only cyclically fertile, and within a normal cycle will go from infertile to fertile (for a short window) and back to infertile. Couples who have tried to conceive a child know all too well that there are infertile periods of the month.

Natural methods of achieving or delaying pregnancy depend on knowledge of a woman’s cycle and body to be able to pinpoint the fertile window and use that time accordingly. There are ovulation calculators (and see the other suggestions below) that make this easier to calculate and track based on your specific cycle.

I often hear it said in the health sphere that every body is different and the path to health depends on being able to tune into one’s individual needs. I think this holds especially true when it comes to fertility. So how to listen and know what is going on with your fertility?

Natural Family Planning or NFP as it is called requires observations of indicators like Basal Body Temperature (BBT), mucus production, cervical position, and other symptoms to predict ovulation. This often means charting these observations to interpret an overall picture of fertility.

You can find a class to teach you how to practice these methods, or there are several apps (this is one of them) that make charting easier. Better yet, there are even computerized devices that connect to these apps and make this process of tracking fertility more accurate and easier to do.

When given the chance by Fairhaven Health, I decided to test four of these fertility monitors side by side for six months and compare the results to see:

The four methods I compared side by side were:

I also charted my fertility using the Sympto-Thermal method of Natural Family Planning. This is what I found:

What It Is: The OvaCue was easy to learn how to use and provided two different types of data: oral and vaginal readings. The OvaCue works by measuring electrolyte levels in saliva and cervical mucus and pinpointing ovulation up to 7 days in advance.

The OvaCue Fertility Monitor consists of a hand-held monitor with a colored screen, an oral sensor, and a vaginal sensor – the ideal combination for pinpointing your most fertile days in your cycle and for confirming when ovulation occurred. The monitor has been demonstrated to be over 98% accurate in predicting ovulation in studies funded by the National Institute of Health.

How I Used It: The OvaCue doesn’t require any charting or additional data. All I had to do was take an oral reading each morning and a vaginal reading each afternoon/evening. It charted my cycle based on the readings and gave a very clear indication of when ovulation would occur and when the infertile window began.

Like all fertility monitors the OvaCue is most accurate for women who have a somewhat regular cycle but it works for those with irregular cycles as well. While breastfeeding and before I had a cycle, I simply reset the monitor every month if I didn’t see ovulation to create another window for it to measure. This would be similar to what might happen for a woman with anovulatory cycles or other hormone imbalances.

The OvaCue is 98% accurate in testing. Here’s an overview: 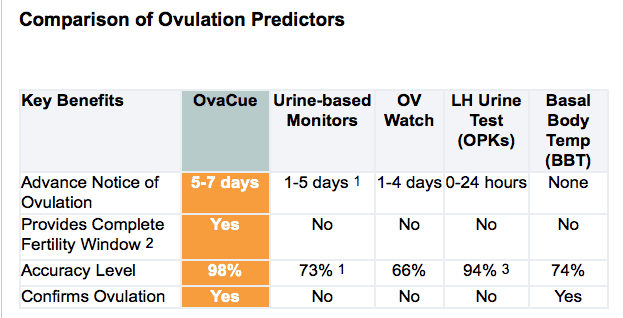 I used the OvaCue to track my hormone levels while breastfeeding and for several months had only minor fluctuations in electrolyte levels, indicating no fertility. Once fertility returned, it predicted ovulation 7 days in advance and gave me an accurate measure of when the fertile window ended.

Overall, I preferred the OvaCue and it is the method that I will be using from now on. It is more pricey than the other fertility monitors I tested (though less than the popular LadyComp), but I felt it gave the most accurate data. The OvaCue also matched my charting exactly for my fertile window and showed fertility ending when basal temperature confirmed that this was the case.

What It Is: The Fertile Focus uses a microscope to track the changes in the saliva that correspond with changes in fertility. The website explains the FertileFocus microscope:

Fertile-Focus allows women to identify their most fertile days by testing and viewing the visual changes that take place in saliva throughout the monthly cycle. Just prior to ovulation, women experience an “estrogen surge,” and a distinct fern-like pattern becomes visible in saliva due to the hormonal changes. Fertile-Focus provides the highest quality, powerful 50x magnification lens for easily identifying these crystal “ferning” patterns.”

How I Used It: The Fertile Focus predicts ovulation several days in advance based on the patterns in the saliva. Since I was using the OvaCue while nursing a baby and creating “cycles” for it to track, I used the Fertile Focus as a backup method to show ovulation if the OvaCue missed it. All that is required is to place a small amount of saliva on the fertile focus each morning (before eating or drinking), let it dry and then look at it with the microscope.

The Fertile Focus showed the ferning pattern in my saliva at the same time that my charting showed a rise in fertility and the same time that the OvaCue predicted ovulation. It only gave me about 3 days advance notice, compared to the 7 day notice with OvaCue but it was fascinating to see the change in my saliva.

I liked how portable and easy to use the Fertile Focus was, but prefer the extra data with the OvaCue. The Fertile Focus is also the least expensive of the methods I tried. Though it didn’t provide as much advance notice of ovulation, it did predict it accurately.

What It Is: The iBasal Thermometer is a device that relies on the Basal Body Temperature (BBT) method for tracking fertility and pinpointing ovulation. The iBasal has a built in alarm clock to remind you to take your temperature each morning and it measures temperature to 1/100th of a degree. I’ve charted with the BBT method before but the iBasal charts for you to make the process easier.

Basal body temperature (BBT) charting is a tried and true method for determining precisely when during your menstrual cycle you ovulate. Your basal body temperature is the temperature at which your body rests, which tends to be a bit lower than your “normal” temperature, usually 97 point something degrees F versus 98.6 degrees F. By measuring your BBT each morning (after a full night’s sleep) throughout your cycle you can detect the natural and subtle rise in your basal body temperature that occurs just after ovulation. This post-ovulatory shift in BBT is caused by increased production of the hormone progesterone, sometimes referred to as the “warming hormone.”

How I Used It: I kept the iBasal by my bed and took my temperature with it each morning. While I was nursing and didn’t have a cycle, it showed slight variations in my temperature, but not enough to indicate a shift in fertility. Also, since I was working on improving my thyroid hormone levels during this time, it registered a few false ovulations, though most women (even while nursing) wouldn’t have this variable to deal with.

It did confirm that ovulation had happened after (which corresponded with the other methods I was using) but it didn’t give advance notice.

What It Is: Ovulation sticks use urine to identify a rise in LH (Leutenizing Hormone) that occurs 12-48 hours before ovulation. They are very accurate, but don’t give much advance notice of ovulation.

How I Used Them: I use these mainly to confirm what the fertility monitors were saying and confirm that ovulation did occur. They can be pricey and must be bought each month, so they aren’t the best option but they do give an extra way to confirm that ovulation has occurred and that LH levels have dropped. I won’t use these long term but they were useful as an extra way to verify the data from the other machines.

What I Use Now

After comparing all four methods side by side for six months, I’ll be sticking with the OvaCue and using the Fertile Focus as a back-up to verify. There is also a great community at Fairhaven Health of women using these different methods and they have forums where you can ask questions and get advice.

As I’m trying to temporarily avoid pregnancy, I’m using these methods to pinpoint my fertile window so I can avoid getting pregnant, but the same technology is excellent at helping pinpoint ovulation to achieve pregnancy.

With this existing technology and as more research and innovation happens, fertility monitors provide an alternative to hormonal contraceptives and also allow women to know and understand their bodies and possibly identify hormonal problems.

This article was medically reviewed by Dr. Anna Cabeca, a gynecologist and obstetrician and a menopause and sexual health expert. As always, this is not personal medical advice and we recommend that you talk with your doctor.

Have you ever used a fertility monitor or natural family planning method? Please share what worked for you below! 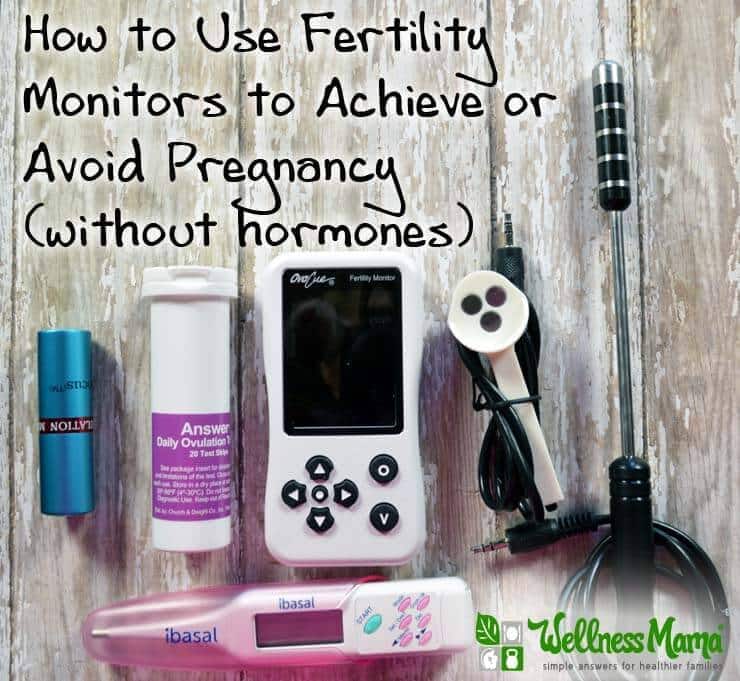 DIY Outdoor Burlap Wreath (For Any Season)
Next Post: What Our Poop Reveals About Digestive & Gut Health