Being of Irish/Scottish descent, the adjustment away from potatoes was a tough one! I used to make shepherd’s pie regularly every couple of weeks because it was easy and the kids loved it. When we first got rid of grains, potatoes, and sugars, I thought this was a recipe I would have to forget. Until a pregnancy induced craving prompted me to find a healthy alternative. I thought about using sweet potatoes, but then it dawned on me — cauliflower! I’d used this in place of mashed potatoes and rice before, so why not in this recipe? It was also a great way to sneak an extra vegetable in for the kids.

For those not familiar with it, shepherd’s/cottage pie is a meat and vegetable casserole with gravy, topped with mashed potato (or cauliflower), and baked in the oven. From my understanding, shepherd’s pie is made with lamb and cottage pie is made with beef or other meat. I’ve always used the terms interchangeably. This is an easy recipe to prepare ahead of time and heat up when you are ready to eat. The leftovers taste even better than the first night (unlike the potato version… I’ve never liked the texture of reheated potatoes). 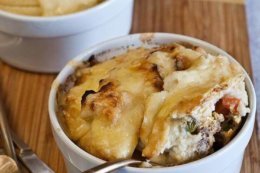 If you like your shepherd's pie a little more "saucy" you can easily make a quick gravy with beef stock thickened with arrowroot.

Now I just have to figure out a recipe for a good stout homebrew and I’ll be one happy Irish lass!

Ever made shepherds pie? How did it go?

How to Help Your Body Reverse Diabetes
Next Post: Natural Homemade Baby Wipes