Paella is a traditional rice dish from eastern Spain that was traditionally cooked over an open fire. It can include practically any ingredient that goes well with rice, but seafood variations are seem to be the most common.

Paella has a rich yellow color from use of saffron and complex flavors from other spices, onions, peppers, and garlic. Never used saffron before? It has a long history of use beyond its delicate food flavoring. From Mountain Rose Herbs:

Saffron has a well-deserved reputation as being the most expensive of herbs and spices, even when one considers that no more than a thread or two of the precious spice is needed to flavor an entire meal. Besides its culinary uses, though, saffron has a long history of medicinal use, both in Eastern and Western traditions. Seen as mostly a culinary herb for decades, the new interest in herbal remedies is bringing saffron’s medicinal properties back into the limelight. The herb was mentioned in the Bible, and was used by ancient Greeks, Indians and Egyptians. 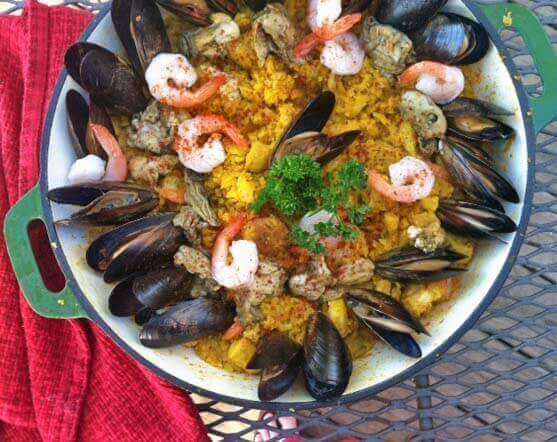 This recipe can be easily customized to use any protein source you like (chicken, sausage, fish, shrimp, oysters, etc.) or all of the above. Many paella recipes contain a mix of proteins. Though the original recipe calls for rice, I substitute grated cauliflower for a boost of nutrients and to make a grain free dish.

Paella is NOT a quick meal to prepare, but the extra work is well worth it! 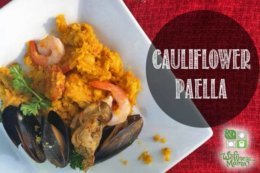 Print Pin
No ratings yet

A delicious grain free paella made with cauliflower rice and choice of meat, sausage, or seafood (or all of them) for a filling and healthy meal.
Course Main
Cuisine Spanish
Prep Time 20 minutes
Cook Time 1 hour
Total Time 1 hour 20 minutes
Servings 6 +
Calories 420kcal
Author Katie Wells
The ingredient links below are affiliate links. Click here to read my affiliate policy.

Ever made paella? What ethnic foods do you enjoy? Share below!