Rainy days, long afternoons…  sometimes we mamas need a trusty list of fun kids’ activities! A homemade finger paint recipe deserves to make the list. This version can be as simple as two ingredients.

Even better, it’s totally edible and non-toxic if they just happen to eat some!

I usually opt for homemade when I feel the need to be crafty (or I want to avoid a chemical-filled version). This is one reason I also make DIY beeswax candles instead of buying artificial fragrance filled ones.

Store-bought finger paint ingredients are proprietary, meaning they don’t have to disclose everything that’s in it. Yes, they’re labeled non-toxic, but that’s not quite the same as natural and edible. This homemade finger paint recipe is made with real food ingredients so if little ones decide to taste a finger full, no harm done!

A lot of DIY finger paint recipes call for cooking flour or cornstarch with water, and often call for cooking. Flour can cause issues for those with gluten allergies and corn starch is usually GMO.

Instead, this recipe uses two simple ingredients: yogurt and edible food coloring. It’s always a bonus when there’s one less thing I have to cook!

There are several ways to color your finger paint naturally, based on what you have. 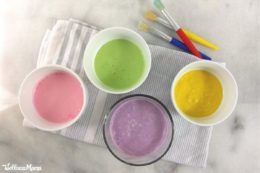 It depends on the ingredients used, but this finger paint recipe can last 1-4 weeks in the fridge. If you use fresh yogurt and the premade food coloring it should last several weeks. The homemade food coloring and yogurt will last closer to several days to one week.

I would get a little out at a time for kids to use and store the rest in the fridge as needed for later. Hands and fingers dipped in the yogurt mixture will introduce bacteria that cause it to spoil faster.

Which edible food colors are you going to try?

Homemade Coconut Milk Recipe
Next Post: Why You Should Never Eat Vegetable Oil or Margarine