A common theme I’ve noticed among many women today is an obsession with the number on the scale. It is so easy to get caught up on the number, rather than the health behind it.

One of the most frustrating assumptions of conventional wisdom is that calories in = calories out and that obesity is caused by simply eating too much or exercising too little (AKA Gluttony or Sloth).

Of course, along with this bit of CW is the idea that a low-fat, fiber rich, whole grain diet can increase health and lead to weight loss, and that since fat has more calories per gram, we should eat less of it to lose weight and more of the lower calorie carbohydrates and protein.

The problem… there are so many holes in the logic of these assumptions that they don’t hold water… or bacon.

If you can answer all those questions with true logic and science without contradicting yourself, I’d love to hear it, because I don’t think it’s possible.

Organizations like Weight Watchers, Jenny Craig, etc. function on the basis of calorie restriction and overall food consumption. Programs like this do provide a level of accountability and measuring of results, both of which can be very beneficial, but they still function under a flawed set of underlying ideas.

Sure, diets that reduce calories can work for a while, but statistically, most people will eventually fail at these diets and gain the weight back (plus some).

Programs like this (and most gyms) also proclaim that simply exercising more is the key to weight loss and that increasing cardio exercise will burn more calories and thus cause weight loss. Unfortunately, while exercise does use energy, this energy use has the effect of making us hungry, which inclines us to eat more, and the cycle repeats.

Additionally, while proteins, fats, and carbohydrates all do contain calories, these substances are used for different purposes in the body. Protein is largely used for cell function and structure, fats for hormone creation and building of cell membrane and carbs for immediate or stored fuel. Any carbohydrates not immediately needed for fuel are graciously escorted, via insulin, into fat cells for later use.

In the end, the idea of calories in vs. calories out doesn’t really tell us anything about the exact cause of obesity. A great analogy that I’ve seen Gary Taubes and Dr. Michael Eades use is that of a crowded restaurant:

Imagine that you are a waiter at a restaurant and the restaurant suddenly becomes very crowded. You turn to a fellow waiter and remark “Wow, I wonder why there are so many people here all of the sudden?” to which the other waiter responds “Obviously because there are more people coming into the restaurant than are leaving.”

The other waiter has made a very obvious assertion, but he is not answering the real question you were trying to ask, which (paraphrased) was “What outside event or activity is causing all these people to come into the restaurant now?”

A 5 year old could observe that more people are entering than leaving, but what causes it? Perhaps a football game nearby or a menu special that night? Add to this that even if counting calories were an effective strategy, there is literally no way to do it precisely or accurately enough to prevent weight gain. From Gary Taubes:

If you consume about 2,700 calories a day, which is typical if you average men and women together, that’s a million calories a year, or ten million calories in a decade. Over the course of a decade, you’re eating roughly ten tons of food. How accurately do you have to match calories-in to calories-out so that you don’t gain more than 20 pounds over the course of a decade? Because if you gain 20 pounds every decade, you’ll go from being lean in your 20s to obese in your 40s, which many of us do. And the answer is: 20 calories a day. If you take in an extra 20 calories a day and put it into your fat tissue, you will gain 20 pounds every decade.

The point is, nobody can match calories-in to calories-out with that kind of precision. Twenty calories is like a single bite of a McDonald’s hamburger. It’s a couple of sips of Coca-Cola or a few bites of an apple. No matter how good you are at counting calories, you can’t do it. So if practicing energy balance is really the way to keep from getting fat, the question is, Why aren’t we all fat?

So, if simple calorie equations aren’t the answer, and neither is limiting fat consumption or eating more whole grains… what DOES cause weight gain/loss?

Put very simply, we gain weight for the same reason that growing children, pregnant women, post menopausal women and women on their period do… a delicate interaction between food consumed and a host of hormones.

There are many factors involved in this hormone reaction, from the fats we consume that are needed for hormone creation, to the carbohydrates that raise insulin (and cortisol and leptin and..)… hormones are vital.

So what happens when you deprive the body of the proteins and fats needed for hormone creation and cell structure and replace them with insulin raising carbohydrates? The last couple of decades should give you a good idea.

Consider that sumo wrestlers consume a diet that is between 57 and 80% carbohydrate to achieve their large frames, while researchers have yet to be able to get participants to put on weight on an all-meat diet.

In other words, to get young men, who are athletes by some measure, to put on weight, they must be fed a low-fat, high carbohydrate diet… yet this is the same advice we give to middle aged women seeking to LOSE weight?

What if fat-containing diets don’t cause weight gain (or heart disease)?

What if reducing calories and increasing activity aren’t the answer to excess weight?

What if excess consumption of carbohydrates, especially from processed sources, does cause these problems? Would the equation make more sense?

Consider that carbohydrates cause a rise in insulin levels, and it is insulin that ushers fat into cells for storage. Consider also that obesity and diabetes are strongly correlated, and that these conditions also raise the risk of heart disease.

When we consider that excess carbohydrates, and thus excess insulin could be part of the root cause, not dietary fat, everything starts to seem much more logical. Perhaps bacon is the “good guy” and those low-fat granola bars are the “bad guy” when it comes to weight loss and gain.

Jason at Everyday Paleo, wrote a great post about this (though the post was recently taken down),  explaining that weight is little more than the effect of gravity on your mass, and should be treated as such. From his post:

Measuring gravity’s affect on your body, and then assuming that measurement to be relevant to your physical attractiveness is insanity. Stop doing that. Now!

I will concede that the scale can be a motivational tool in the first few weeks of paleo eating and proper exercise, but after that it quickly becomes worthless. Please allow me to make a few points and try to play to your sense of reason.

I understand the desire for a tangible, measurable mark of progress, and certainly that is good to have, but if aesthetics or weight are the ONLY goal, making progress can be difficult.

Those who have a serious or life threatening condition and are very motivated to make lifestyle changes are typically the ones most likely to change. Logically, these people also lose the most weight, though this often isn’t their focus.

On the other hand, those who focus heavily (no pun intended) on weight, have a difficult time losing it. From a psychological perspective, this makes sense too. If you are constantly thinking about your extra weight, feeling bad about your extra weight and asking yourself “why can’t I lose this extra weight?” … your subconscious is going to try to ease that anxiety and give you mental reasons (excuses) that you can’t lose that weight.

Concentrating solely on weight also shortchanges people from a health perspective, since it encourages eating too little to try to make the number move faster. Contrary to conventional wisdom, since it isn’t just about calories, eating too little can slow progress.

Still not convinced that weight is irrelevant? Jason gave an example in his post of a client who made massive health and fitness improvements, yet her weight before and after was exactly the same! 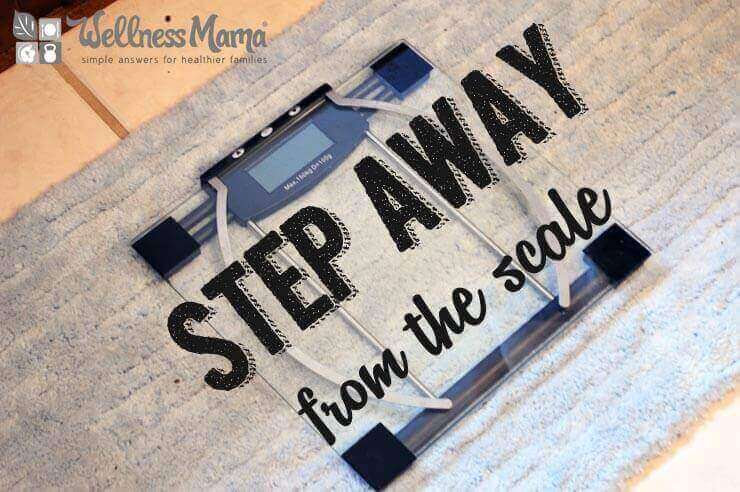 If you need a concrete benchmark of progress, measure yourself or take before pictures. This will be much more encouraging to see progress in and will help avoid the unhealthy focus on weight.

On Cholesterol and Heart Disease (Eades)

The Lipid Hypothesis Has Officially Failed- Part I (Gnolls)

Sugar Addiction: Or Why You Are Addicted To Bread

Why Diets Work, When They Do (Taubes)

What do you think? Still prefer the scale or willing to switch to measurements and pictures? Let me know below!