Rebounding is an exercise I do daily, but I must admit that when I first heard about it, the idea sounded crazy. If you aren’t familiar with it, rebounding is basically jumping on a mini trampoline either in gentle bounces where your feet don’t leave the trampoline or in complete jumps where you rise 6 inches from the surface.

Glad you asked. Turns out that there are many benefits to rebounding (including NASA’s research showing that rebounding can be more than twice as effective as treadmill running).

The idea of rebounding has been around for a long time, but it gained popularity in the 1980s when NASA studied its benefits while trying to find an effective way to help astronauts recover and regain bone and muscle mass after being in space. Astronauts can lose as much as 15% of their bone and muscle mass from only 14 days at zero gravity, so NASA needed a way to help reverse this damage.

Some of the findings of the NASA study:

Many types of exercise are done to target specific muscles or just to increase cardiovascular function. Rebounding is unique since it uses the forces of acceleration and deceleration and can work on every cell in the body in a unique way.

When you bounce on a rebounder (mini-trampoline), several actions happen:

The action of rebounding makes use of the increased G-force from gravity based exercises like this and each cell in the body has to respond to the acceleration and deceleration. The up and down motion is beneficial for the lymphatic system since it runs in a vertical direction in the body.

Another study showed that the increased G-force helped increase Lymphocyte activity. The lymph system transports immune cells throughout the body and supports immune function. For this reason, rebounding is often suggested as a detoxifying and immune boosting activity.

Rebounding, since it affects each cell in the body, can also increase cell energy and mitochondrial function.

One of the major benefits of rebounding is its benefit to the skeletal system. Just as astronauts lose bone mass in space as a response to the decreased need for strong bones in a zero gravity environment, weight bearing exercise increases bone mass. Rebounding is especially effective at this since it increases the weight supported by the skeletal system with the increased G-force of jumping.

James White, Ph.D., director of research and rehabilitation in the physical education department at the University of California at San Diego (UCSD), has explained how jumping for health offers a true physical strengthening effect to the muscles.

“Rebounding allows the muscles to go through the full range of motion at equal force. It helps people learn to shift their weight properly and to be aware of body positions and balance,” says White.

An advocate of rebounding for athletic conditioning, White uses the rebounder in his rehabilitation program at UCSD. “When you jump, jog, and twist on this [jumping] device, you can exercise for hours without getting tired. It’s great practice for skiing, it improves your tennis stroke, and it’s a good way to burn off calories and lose weight,” says White. (source)

I mentioned many of these above, but here are the benefits of rebounding without all the science and sources:

How to Start Rebounding

Essentially, it is as easy as starting to bounce daily. Most sources I’ve seen recommend rebounding for 15 minutes or more a day, though this can be broken in to multiple 3-5 minute groups.

Though rebounding is a gentle activity, it is best to start with feet on the rebounder and only gentle jumps and work up to jumping with feet leaving the rebounder.

Personally, I jump on the rebounder for a few minutes when I wake up, then dry brush my skin (both are good for avoiding cellulite) and then shower. I also jump on the rebounder a few times a day when I remember. I keep it in my bedroom, so I usually remember when I go in my room to fold laundry or change clothes.

There are a lot of different models of rebounders to choose from. The more expensive models are supposed to have better springs to reduce the impact to joints, but any small trampoline will work. Here are a few I’ve personally tried:

Human lymphocyte activation is depressed at low-g and enhanced at high-g.(NCBI)

Rebounding: Good for the Lymph System

Ever tried rebounding? Will you give it a go? Tell me below! 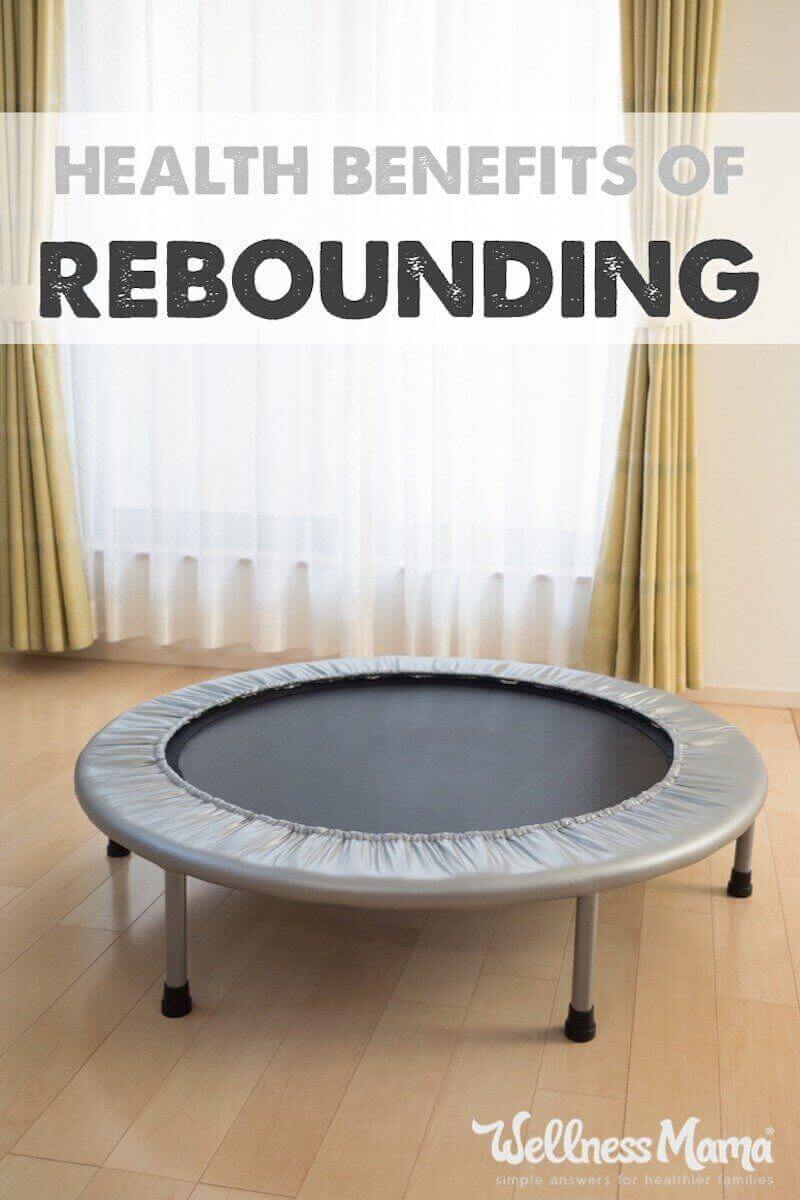