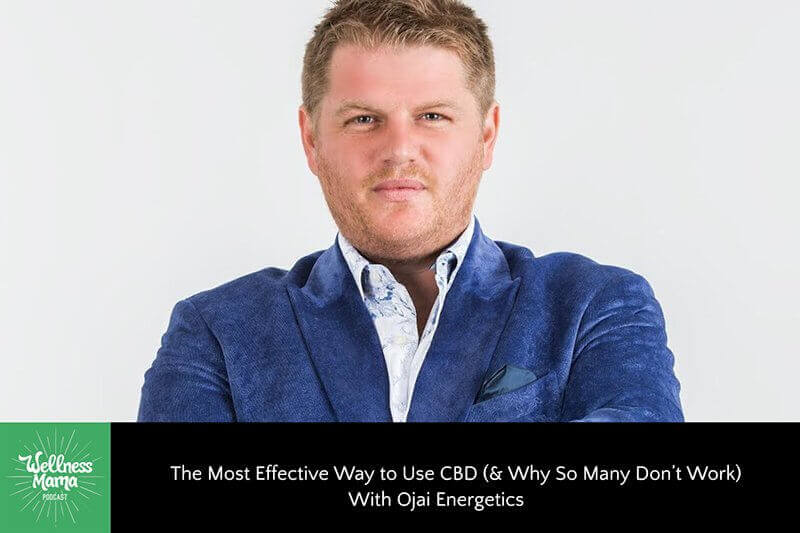 Wellness Mama » Podcast » 220: Will Kleidon on The Most Effective Way to Use CBD & Why Most Don’t Work

The Wellness Mama Podcast
220: Will Kleidon on The Most Effective Way to Use CBD & Why Most Don’t Work

Today’s episode is all about CBD, a hot topic in the health world and one I get so many questions about. My guest Will Kleidon founded Ojai Energetics in 2014 with one goal: to provide the purest, healthiest, and most ethically produced cannabidiol or CBD on the market.

Four years later, his business is doing just that and they’re using this science-driven organic nutraceutical to help people achieve optimal physical health. We’re going to clear up some of the controversy surrounding CBD and explain why it’s such an important compound that many of us need.

Did you enjoy this episode? What other questions do you have about CBD? Please drop a comment below or leave a review on iTunes to let us know. We value knowing what you think and this helps other moms find the podcast as well.

This episode is sponsored by Fabletics. So here’s the deal- if you’re anything like me and workout pretty much 6 days a week and sauna daily, you go through an incessant amount of gym clothes everyday, which means more loads of dirty laundry. I find myself always buying more gym wear to avoid this issue (you ladies know what I’m talking about), but won’t shell out hundreds of dollars on the expensive brands and was tired of cheap gym wear that wears out quickly with lots of washing. My solution to this predicament is a brand call Fabletics. If you haven’t heard of them- you’re missing out! Fabletics is a fashion focused activewear brand founded by Kate Hudson and its mission is to empower women by making a healthy, active lifestyle accessible to everyone because of its exceptional price point. No matter if you’re ready to zen out in hot yoga, crush it in a crossfit class or simply take a stroll in the park, Fabletics has you covered and carries gym wear suitable for any type of workout. Fabletics IS your one-stop shop for affordable gym wear and ALL of their designs are created in-house. Plus, they are cute enough that I find myself wearing them everywhere, not just to workout, or throwing on one of their pullover tops for a cute outfit. Before I forget, Fabletics is offering you an incredible deal you don’t want to miss: Get 2 leggings for only $24 ($99 value) when you sign up for a VIP. Just go to fabletics.com/wellnessmama to take advantage of this deal now. Also free shipping on orders over $49. International shipping is available and there is absolutely no commitment when you purchase your first order.

This episode is brought to you by Genexa, the first ever organic and non-GMO medicines that use patented technology to create formulas that work, without the dyes, artificial sweeteners or harsh preservatives. Founded by two dads on a mission to find better products for their own kids, I love the commitment to quality Genexa has and how well their products work. One of my favorites is their homeopathic arnica tablets. I recently got back into power lifting and running and the first few weeks… ok months… were a little rough. The Arnica Advantage and the pain crush topical were a lifesaver for me. To shop their full line of organic and non-GMO medicines, go to Genexa.com/Wellnessmama and use code WELLNESS for 20% off your order!

219: Kiran Krishnan on Why Everything We Know About Probiotics Is Wrong
Next Post:221: Dr. Mark Cucuzzella on Natural Movement, Sustainable Fitness, & Lifelong Health