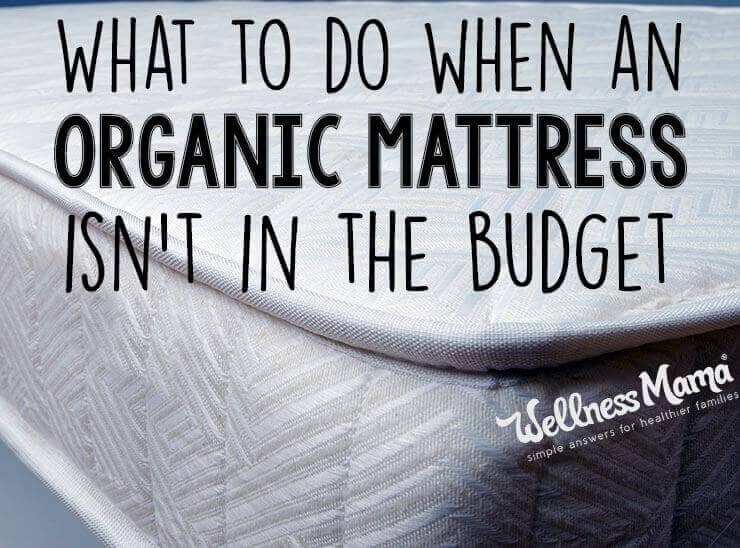 When A Natural Mattress Isn’t in the Budget

Over the last 5+ years, I researched my way into a natural mattress for our family, but the process was long, somewhat dramatic, and expensive. For many years, a healthier, natural mattress just wasn’t in the budget for us, no matter how important I thought it was (as we saved for years to purchase ours).

In the years before we finally found the mattress we love and were able to purchase it, I found several ways of mitigating many of the problems with traditional mattresses and making ours work for us in the meantime.

Why A Natural Mattress?

We spend about a third of our lives sleeping, meaning that our sleep environment is at least as important (if not more so) than our work environment or the rest of our home.

Many of us go to great lengths to avoid harmful substances in our food, beauty products and cleaning products without realizing that our sleep environment may be our main source of harmful chemical exposure.

In particular, the biggest concerns I had after researching mattresses were:

Mattresses often contain a variety of chemicals designed to make the mattress flame retardant. Typically, the newer the mattress, the higher the concern about these chemicals.

Added chemicals most often found in mattresses are:

The fact that these chemicals were found in high levels in almost 100% of adults who were tested (in the US) shows that the body is capable of absorbing and storing them.

In theory, these chemicals are most concentrated and harmful in new mattresses, although there is evidence that mattresses may still off-gas for many years. Mattresses made before 2007 were typically not sprayed with PBDEs or most other flame retardant chemicals, and may be safer.

If you have an older mattress (pre-2007) it may be worth keeping, at least until an organic mattress is an option, rather than replacing with a newer but less expensive mattress.

While flame retardants and other chemicals are found in the highest levels in new mattresses, old mattresses have their fair share of problems as well. In fact, one bacteria often found in mattresses has been implicated as a possible contributor to SIDS and may pose problems for adults as well:

Sheepskins and regular mattresses contain phosphorous, arsenic and antimony, which are the preferred food of a common household fungus, S. Brevicaulis. While these elements are naturally occurring in some (but not all) sheepskins, they are actually added in via the manufacturing process of regular mattresses. Arsenic and antimony are used as preservatives in mandatory flame retardants and phosphorous is a plasticizer used in mattress covers – anything containing PVC will have these compounds.

According to Barry Richardson, a British chemist specializing in preventing the degradation of materials, when S. Brevicaulis gets established in a mattress it converts these compounds into toxic nerve gases which can shut down the nervous system, stop heart function and arrest breathing.

Stibine gas, which is formed from the interaction of the S. Brevicaulis fungus with antimony, is particularly heavy and – according to the theory – clings to the surface of the mattress. “A baby sleeping face down will breathe this gas directly and is more likely to inhale a lethal dose,” says this this article in Midwifery Today, adding that “babies sleeping on their backs are still exposed to the lighter nerve gasses: arsine and phosphine. In a warm environment phosphine can be similar to the density of air, and easily inhaled by a baby sleeping on its back. In addition, face-up sleeping is not as effective in a cot or bassinet with enclosed sides, because the gasses cannot flow away.”

We also know that mattresses and pillows are a prime habitat for dust mites due to the presence of dead skin cells- their food of choice. A study from Ohio State University found that a used mattress may have up to 10 million dust mites inside.

Though dust mites are disgusting, they are generally harmless themselves, it is their feces that most people are allergic to:

According to the American College of Asthma, Allergy & Immunology, approximately 10 percent of Americans exhibit allergic sensitivity to dust mites. The American Lung Associations tells us “Dust mites are not parasites; they don’t bite, sting or burrow into our bodies. The harmful allergen they create comes from their fecal pellets and body fragments. (source)

That makes you feel better, right? The dust mites aren’t actually a problem, you’re just reacting to breathing in their poop all night.

This is one area of concern from mattresses that seems to be often misunderstood and controversial. On the one hand, some sources claim that the springs in conventional mattresses act as an amplifier for wi-fi and EMFs, and that this is the reason for higher rates of breast and other cancers of the left side of the body in the US and most of the developed world (but not in Japan, where mattresses do not contain springs).

I researched this claim in depth and while it seems that some mattresses may have a slight ability to amplify EMFs, the mattress is not the problem, the EMFs are. In my research and in taking measurements in my own home, I found that whether or not a mattress had springs was much less of an indicator of EMF levels than how close the bed was to a meter, wi-fi router, or electronic device (phone or computer).

The bottom line, in my opinion, is that while coils in mattresses may highlight the importance of understanding and reducing EMFs in general, they are a very small piece of a much bigger puzzle.

Natural Mattress: What to Do?

Until a non-toxic mattress was in the budget for us, I sought to reduce each of my concerns about our older mattress. This is what I did:

We bought our mattress around 2006, so when I researched it a few years later, I realized that there was a good chance it was not sprayed with the most harmful of flame retardants.

At the point when I started to have concern about our mattress, it had already been off-gassing for several years (unfortunately, in our room), and a newer conventional mattress would have potentially had more chemicals than our existing mattress. When the older mattress started getting uncomfortable, we added an inexpensive natural topper to make it last until we could afford an organic, natural mattress.

As mentioned above, off-gassing is one of the biggest potential problems with many mattresses, especially newer ones. Unfortunately, the only way to fully eliminate this problem is to use a mattress that doesn’t contain the chemical in the first place, but when that isn’t an option, a mattress encasement (not just cover) may help reduce exposure to off-gassing.

There are specialized covers made of polyethylene that have been shown to reduce exposure to chemical off-gassing. In fact, New Zealand ran a highly effective SIDS prevention campaign encouraging parents to wrap mattresses in a polyethylene encasement (like this one) and it has been highly effective in reducing the incidence of SIDS. (Certainly, this is a more complicated and highly emotional topic, but New Zealand’s results do provide insight that perhaps off-gassing is a more important issue than we once suspected).

Encasing adult mattresses seems to be more difficult. An ideal situation would be to fully encase a mattress on all sides in an air-tight food-grade polyethylene cover, but these covers are extremely difficult to find. There are some, like this one, that fully encase mattresses and have a thin layer of polyethylene to block off-gassing. It is also possible to make your own using a higher quality polyethylene sheeting and tape.

The downside, of course, is that polyethylene is still plastic and may have its own share of problems, but after weighing the risks and benefits of each, I was more comfortable with the polyethylene coating than the potential off-gassing chemicals, so we encased our mattress until we could replace it.

Thankfully, while the jury is still out on how much a quality mattress encasement can reduce chemical off-gassing, we do know that they reduce exposure to dust mites (and also protect against bed bugs!).

A simple full mattress encasement has been shown to block dust mites, bacteria, mold, mildew and other allergens, so this is a simple fix that is very effective.

If you are highly concerned about off-gassing and allergens, it might be more effective to wrap the mattress in plastic sheeting and then cover with an encasement to address both issues.

Reduce EMFs in the Room

As I mentioned above, I think EMFs are definitely a concern, but mattresses are very low on the list of places to address EMFs. In a previous post, I compared getting rid of mattress springs to reduce EMFs to putting a filter on a cigarette to reduce harmful exposure… it may help some but it doesn’t address the real problem.

While I think natural mattresses are important for many other reasons, I personally think that these steps are much more important when it comes to EMF exposure (from this previous post):

If comfort is the issue but the mattress is otherwise good, I’d try a mattress topper to make it more comfortable. We purchased a down topper, which helped some, but not as much as I’d hoped since our mattress was getting older and it was too firm.

If I had known about it, I would have gotten an Intellibed Topper, which offers many of the same comfort benefits as a full Intellibed mattress at a fraction of the price.

Combined with a mattress encasement, this may help an older mattress remain usable for a long time without the need to fully replace, especially if the mattress is older than 2007 and has less issue with flame retardants.

I consider a non-toxic mattress a big priority for improving health, but these mattresses are pricey and not an option for many families on a budget (including our family, for several years). When a new mattress isn’t an option, the solutions above can extend the usability of an older conventional mattress and help mitigate some of the potential problems.

Do you have a natural mattress? If not, what steps have you taken before getting one?