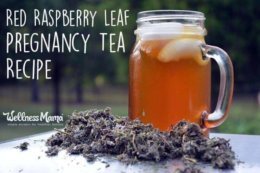 How to Use Rhassoul Clay For Beauty and Detox
Next Post: Lavender Honey Burn Salve Recipe