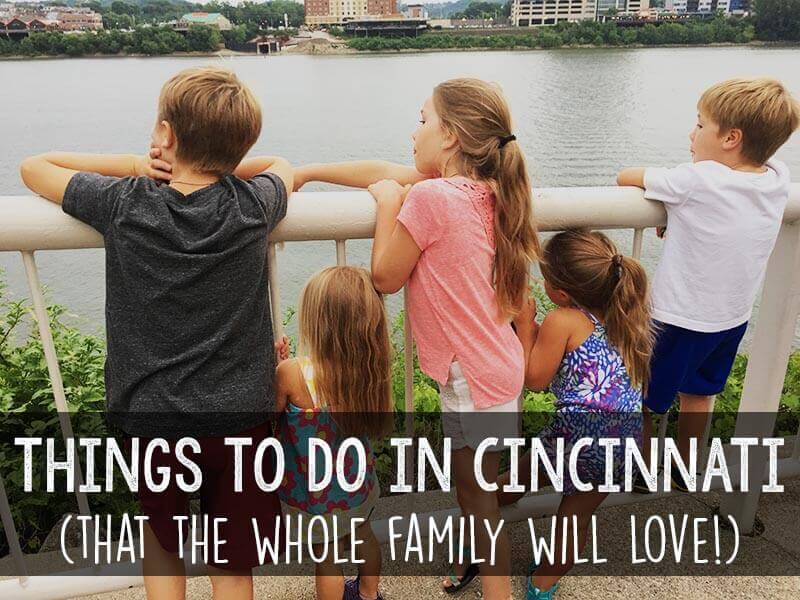 Cincinnati is one of our favorite cities to visit, and not just because we are fans of their sports teams. The city (and surrounding area) has so much history and so many fun things to do with kids. We make it to Cincinnati at least once or twice a year and would definitely recommend putting it on your list of places to visit!

Things to Do in Cincinnati Ohio

From our dozens of trips to Cincinnati, these are our favorite activities that were fun for adults and kids alike!

Go Under the Sea at the Newport Aquarium 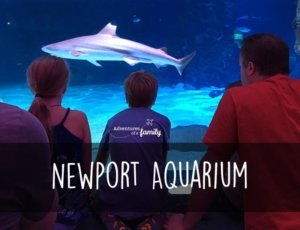 One of the more popular places to visit near Cincinnati and with good reason. We all loved the Newport Aquarium! Kid favorites here were the shark tunnel (walk over an aquarium of sharks on a thin rope bridge) and the tank where you can pet the sharks. We (the adults) enjoyed all the acrylic tunnels that let you essentially walk through the different aquarium tanks. The only downside is that tickets are somewhat pricey, especially for a large family.

TIP: Call ahead to check for specials like the free child admission days. The penguin interaction exhibit is worth the extra money if you have the time.

Get Hands on at Cincinnati Museum Center 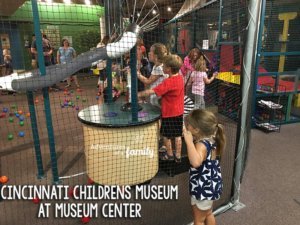 The Cincinnati Museum Center Children’s Museum tops the list of favorite places for most of our children. A very interactive hands-on museum with plenty to do for all ages. We spent 4 hours there and I think the children would have stayed twice as long. They also host traveling Smithsonian exhibits like the upcoming “Star Wars and the Power of Costume Exhibit” (coming May 2017) that we plan to go back to see.

TIP: Call ahead to check on closings as the museum center is under renovation for the next couple of years. 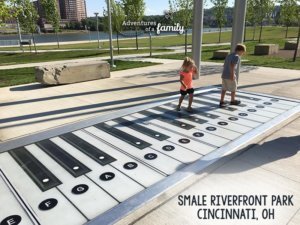 On our last visit to Cincinnati, we were looking for a place to let the kids run around and the map on my phone found Smale Riverfront Park as the park closest to us. This hidden gem is one of our new favorite places to go in Cincinnati and for future trips, we plan to picnic here for meals and build in more time for play. It has a LOT of playgrounds, huge chess sets, water works places, a jumping piano and so much more. Highly recommend and definitely worth the time!

TIP: Pack a picnic lunch and eat here while the kids run around. Also a close walk to Great American Ballpark, so build in a ballpark tour at the same time if that is on your list.

Root for the Home Team at a Reds Game 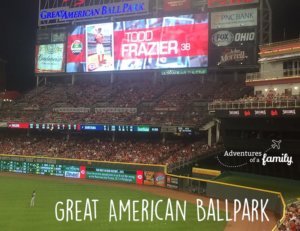 The Cincinnati Reds are the oldest team in baseball (and our favorite team). Even if they aren’t your team, Great American Ballpark (GABP) is worth the visit. If you visit from April-October check for ticket specials and grab some tickets for a game.

TIP: Outfield bleacher seats are great at GABP and you can usually score some for cheap (and sometimes with a free bobblehead or hat if it is a promo night).

Tailgate for a Bengals Game

Who Dey! You’ll hear that chanted often if you tailgate for a Cincinnati Bengals game. If you pass fans wearing Bengals gear on the street, the appropriate greeting is “Who Dey” (and it doesn’t matter if you know them or not- they’ll likely respond in kind). Nobody knows for sure where this chant originated, but the Who Dey culture is strong in Cincinnati, and the best theories suggest it originated from a classic Cincinnati beer: Hudepohl. Fans bond in ways only a consistently losing team can (and I say this as a fan). Though the motto often seems to be “there’s always next year,” Bengals games are a good time!

TIP: Tailgate even if you don’t go to the game. Here’s the thing- Football tickets are pricey, and even more so when you need eight of them! But tailgating is inexpensive and sometimes even more fun. On game days, tailgating starts early and you’ll have fun walking through the tailgating, playing Cornhole and seeing all the tiger themed decorations. 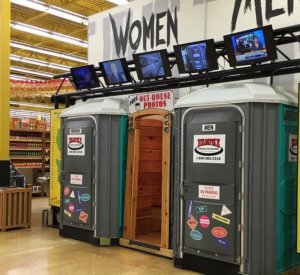 This is at attraction that is free, at least if you have to do some grocery shopping anyway, though I can’t guarantee you’ll get out of there without spending a lot of money. Jungle Jims is one of the largest grocery stores and international markets in the country with over 200,000 square feet of space. It is a destination on its own!

Its produce section and hot sauce sections were both bigger than our local grocery store and they carry every obscure international food you can think of (along with all the regular things you’d find at a grocery store).

TIP: Plan at least an hour here and check out the bathrooms…really! They look like a giant Porta-Potty from the outside but are nice luxury bathrooms inside. Our favorite finds: Ostrich eggs, Kimchee, great prices on beef brisket and a selection of unusual fruits to try.

Take the Crew to the Zoo

The second oldest zoo in the country is home to a wide variety of animal species including Cheetahs, Rhinos and Tigers. Its connected to a gorgeous botanical garden and worth the visit. It isn’t one of the biggest zoos in the country but worth checking out.

TIP: Save money and skip the wait by buying tickets online. Go early in the day when the animals are the most active, and go counter clockwise (opposite of most traffic).

Visit the Reds Hall of Fame 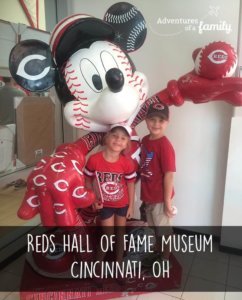 If you are at GABP for a game or a tour, also take some time to check out the Reds Hall of Fame Museum. Amazing history, fun exhibits for kids and a wall with a ball representing each of the Hit King’s (Pete Rose) major league hits. Our kids especially liked the room where they get to pretend the be the announcer for famous moments in Reds history.

Grab Some Food at Findlay Market

The oldest market in the state is now a rejuvenated and thriving farmers market with places to eat and buy food Tuesday-Sunday each week. Random fact- my husband had a family member who had a fruit stand with a guy whose last name happened to be Kroger. The story goes that Kroger wanted to venture out and this relative didn’t want to, so he kept the fruit stand and Kroger started some grocery stores…. Guessing that worked out pretty well for Kroger!

If you’re a Reds fan (and you should be!), this tour is worth the time. Actually since the Reds are the oldest team in Baseball and have such a rich history, it is a fascinating tour for any baseball fan. This tour takes you inside GABP: the press boxes, dugout, the field, even the diamond club. If you’re in town for a weekend, group this with a game and visit the Hall of Fame while you’re at it.

Cincinnati’s Oktoberfest (called Oktoberfest Zininnati) has the distinction of being America’s largest Oktoberfest each year. It also holds the world record for most people doing the chicken dance at one time. Where else can you be part of that kind of history! Each year, it is estimated that Oktoberfest participants consume:

If you can make it to Cincinnati during Oktoberfest, you’ll get a glimpse into Ohio’s rich German history. Try some authentic German food and beer and hear some great German music!

TIP: Get there the night before the big festivities for the annual Running of the Wieners… a 75 foot race of 100 dachshunds wearing hot dog costumes.

Be Part of Opening Day

Opening day of baseball season is a big deal in Cincinnati. Like a really, really big deal. Schools close. Parades happen. Parties ensue. It is a great time… though you might have a tough time getting tickets to the game unless you know someone who knows someone (or unless you are willing to pay for them on StubHub).

Founded in the 1870s by Bavarian immigrants, Graeters ice cream is a long-standing Cincinnati favorite… and with good reason. This amazing ice cream is made in small batches using ingredients you can actually pronounce (milk, cream, etc) and comes in a variety of classic and unusual favorites. There are a dozen locations in the Cincinnati area, so stop by one on your visits.

TIP: You can’t go wrong with any of their flavors but Black Cherry and Mocha Chip are a couple of our favorites.

Get Your Hands on Some Cincinnati Chili

There is one issue that has the power to divide Cincinnatians more than any other: Skyline vs. Gold Star (vs. the other smaller chains). This chili is unlike chili you’ll find anywhere else in the country with hints of chocolate and cinnamon. It sounds strange but tastes delicious and you can get it over noodles (another strange Cincinnati thing) and topped with cheese, onions and oyster crackers. Or just grab a Chili Cheese Coney… just make sure you try this unusual food if you find yourself in Cincy.

Check out the Hofbrauhaus 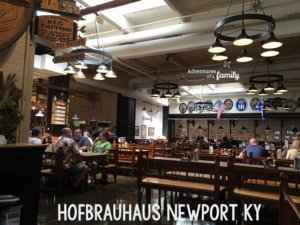 Just over the river in Newport, KY and worth the walk or drive… the Hofbrauhaus House is modeled after the original Bier house in Munich, Germany. One of the only places you’ll find traditional Bavarian food and beer brewed according to the German Purity Laws, or “Reinheitsgebot,” requiring brewmasters to use only hops, malt and water.

TIP: Go for lunch for cheaper food.. and the beer is just as good!

The American Sign Museum has over 20,000 square feet of signs spanning from over a century ago to modern day. Definitely worth spending a couple of hours walking through history here.

Have a Blast at Kings Island

The 364-acre largest amusement park in the midwest… King’s Island is another Cincinnati institution. Generations have visited this massive park that has water rides and a wide variety of roller coasters. If your family wants to go and you aren’t the rollercoaster type… no worries.. there is an Ikea right across the street!

American’s largest Oktoberfest, grocery stores, and oldest baseball team plus some unusual foods make Cincinnati a great family destination. Have you been? What did you love most?