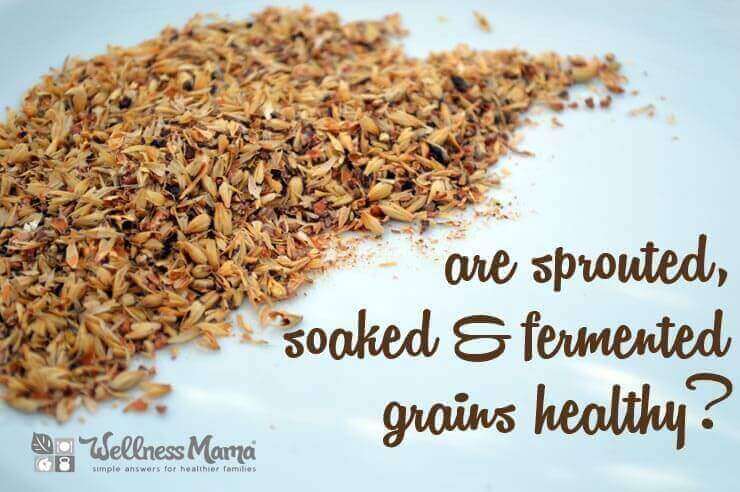 Are All Grains Bad?

Maybe you’ve wondered why grains have become so controversial when people from other countries (usually Asia and Italy are mentioned here) are able to eat them regularly while staying thin and living long lives. There are actually several factors that seem to contribute here, including genetics, other dietary differences, and a vast difference in the actual grains themselves.

Also- while grain consumption is an inherently irrelevant statistic when it comes to both weight and longevity,  if you want a statistically valid comparison, squatting while using the restroom actually seems to be one of the best predictors…

Even in the health community, there is a split between WAPF (Weston A. Price Foundation) followers and the Paleo/Primal/Low Carb group on the health and necessity of grains and if they should be eaten at all. Within these groups, there is disagreement among which grains are healthy and how they should be prepared.

While there is certainly a case to be made for avoiding modern grains for a variety of reasons, there are also traditional preparation methods that cultures have used for thousands of years to help reduce the not-so-great properties of grains and make them more bioavailable. Among these traditional methods are soaking, sprouting or fermenting (or a combination of all three).

What are Soaked, Sprouted or Fermented Grains?

All grains have various properties that protect them in the plant world and allow them to survive to produce seed. In animals, these protective features are often claws, teeth, sharp spines, venomous fangs, etc, or the ability to run away and escape enemies, but plants protective features tend to be a lot more subtle.

The protective mechanisms of those amber waves of grain are harder to identify externally. These crops are often eaten by animals, so their protection lies in the ability of their seeds (the “grain” itself) to pass through the animal and emerge on the other side as a pre-fertilized seed, ready to grow.

Plants accomplish this through the presence of gluten, other lectins, enzyme inhibitors and phytic acid which allow the grains to pass through the digestive system without harm to the plant. (note: Phytic acid is especially damaging to bone and tooth health and has been linked to tooth decay) These indigestible compounds are great for ensuring the plants continued fertility, but they can be harmful to humans, especially in large amounts.

Traditional cultures where grains were consumed regularly or in large amounts found ways to reduce the harmful components through methods like soaking, sprouting and fermenting.

These methods rely on using an acidic medium in liquid to soak the grains, a constructive environment to soak them and let them sprout, or a process like sourdough fermentation to alter the chemical make-up of the grain.

Sadly, most grains consumed these days are not prepared in any of traditional ways, and many cultures have largely given up these methods in the name of modern convenience. Yet, science is starting to understand the wisdom of these older methods and to realize that newer, more convenient forms of processing may not only be making grains harder to digest, but may be contributing to micronutrient deficiencies.

From a nutrient perspective, grains prepared in these ways have much higher nutrient levels and lower anti-nutrient levels than grains that are just ground into flour and baked, but should they be eaten?

Mark Sisson sums up the effects of soaking and sprouting in his article about traditionally prepared grains:

Effect on phytate: If the grain contains phytase, some of the mineral-binding phytic acid will be deactivated, but not much. And if the grain has been heat-treated, which destroys phytase, or it contains very little phytase to begin with, the phytic acid will remain completely intact. Overall, neither soaking nor sprouting deactivates a significant amount of phytate.

Effect on enzyme inhibitors: Well, since the seed has been placed in a wet medium and allowed to sprout, the enzyme inhibitors are obviously mostly deactivated. Digestion is much improved (cooking will improve it further).

Effect on lectins: The evidence is mixed, and it seems to depend on the grain. Sprouted wheat, for example, is extremely high in WGA, the infamous wheat lectin. As the wheat grain germinates, the WGA is retained in the sprout and is dispersed throughout the finished plant. In other grains, sprouting seems more beneficial, but there’s always some residual lectins that may need further processing to deactivate.

Effect on gluten: Sprouting reduces gluten to some extent, but not by very much. Don’t count on it. A little bit goes a long way.

Adding fermentation to the mix reduces the harmful properties even more, but does not completely render them harmless.

The presence of these anti-nutrients in all grains also explains why people who avoid wheat for health reasons but still consume “gluten-free” foods may still have health problems. Wheat is definitely at the more dangerous end of the grain spectrum for those with certain health issues, but other modern grains aren’t harmless by a long shot, and many of them are higher in simple starches than wheat.

So, Should We Eat Them?

Certainly, these methods of preparation do improve the nutrient profile of grains, but this still doesn’t mean that sprouted, soaked, or fermented grains are as healthy as they once were or that they should be consumed in large amounts. Many modern grains have been hybridized to be higher yield, but less nutritious. Additionally, many grains are highly sprayed right before harvest, and these chemicals remain in the processed grain or flour and traditional methods of preparation will not remove them.

Certainly, if you consume grains, it would be best to use these traditional methods (preferably all three) and to mill flour yourself using ancient grains that have been grown organically and not hybridized to reduce nutrition.

It should be noted that all plant substances have properties that can make them harmful to humans in some way, but that it is much easier to reduce these harmful properties in other plants (cooking cruciferous vegetables like Broccoli and cauliflower, peeling and cooking sweet potatoes, etc).

Anyone who doesn’t have any food related problems and that have excellent gut health may do great with soaked, sprouted or fermented grains, but I’d still recommend only adding these in after optimizing other aspects of the diet, increasing vegetable intake and making sure to get enough high quality proteins and fats.

There is also a definite difference between grains high in anti-nutrients like wheat, barley, etc and ones like white rice (not brown rice) which are naturally free of the more potent anti-nutrients like gluten) and which seem to be somewhat less harmful.

The other point worth mentioning is that even sprouted, soaked and fermented grains cause a spike in insulin and can inhibit weight loss and lead to other health problems if eaten in large amounts.

What do you think? Do you consume sprouted, soaked, or fermented grains? Totally disagree with me? Share below!