Note: this article is long and goes into a lot of science. If that isn’t your thing, watch the movie Fat Head. It explains much of this in a very entertaining way!

Cholesterol is a lipid that is present in the cell membrane of all the body’s cells. It is essential in proper synthesis of hormones, absorption of fat soluble vitamins, and cell regeneration. Sounds important, right?

It certainly is! So important in fact, that the liver is careful to regulate levels and produce 1000 milligrams or more a day. The current dietary recommendation for cholesterol consumption is only 300 mg daily, not even close to what the body needs and produces naturally. Here’s the kicker though, to keep necessary cholesterol and function properly, the liver produces more cholesterol when you don’t eat enough of it, and when you are getting enough from your diet, you liver produces less!

The typical story on cholesterol and heart disease that you’ve probably heard goes like this:

Seems logical enough, except that when you break it down, the facts don’t make sense. First of all, the Framingham Heart Study, which is the most extensive study on risk factors for cardiovascular disease ever done, found that there is absolutely no correlation between large amounts of cholesterol in the diet and risk of heart disease.

As for the second part, the Lipid Hypothesis, the science here doesn’t make sense either. If blood cholesterol really did cause heart disease, than this would be noticed across the board in different age groups and demographics…. except it doesn’t. In fact, as people age, cholesterol typically decreases some, yet risk of heart disease rises!

Also, women typically suffer 300% fewer heart attacks than men, but higher average cholesterol. Something doesn’t add up! If cholesterol doesn’t cause heart disease, what does? And what effect does cholesterol actually have on the body?

Different Types of Cholesterol and Their Roles

LDL, or Low-Density Lipoproteins typically get the bad rap in the cholesterol world, but LDL serves the important function of transporting cholesterol that the liver produces to the various parts of the body where it can be used. Research is now finding out that there are two types of LDL- Soft big LDL, which are shown to be relatively harmless, and small dense LDL which can be more problematic. The important part to remember here is that while a proper cholesterol balance is necessary, LDL does serve a very necessary purpose! (Interesting note, there has been a correlation shown between consumption of simple carbohydrates and increase in small, dense LDL)

HDL or High-Density Lipoproteins are typically given a halo in the medical world for their role in transporting cholesterol that has been used by the body back to the liver to be excreted as bile. Certainly an important job also, but one that serves its purpose after the LDL has has transported the cholesterol and the body has used it.

Studies are even showing that high cholesterol might not be a problem at all, especially if the two types of proteins are in balance and there are not an abundance of small dense LDL. Some studies even show that higher cholesterol can correlate with a lower risk of heart disease!

In some studies of people around the world, researchers have found that those with the highest blood cholesterol have the lowest risk for heart disease.

Cholesterol is actually a vital nutrient for healthy cell formation and hormone synthesis. It is necessary for production of progesterone, testosterone, DHEA, and other hormones that are vital to proper endocrine function.

Heart disease is the number one killer in our country today, which is startling considering that a little over a hundred years ago, it was practically unheard of! In fact, the first heart attack wasn’t even described in scientific literature until 1912, yet heart disease rates have risen steadily since then. 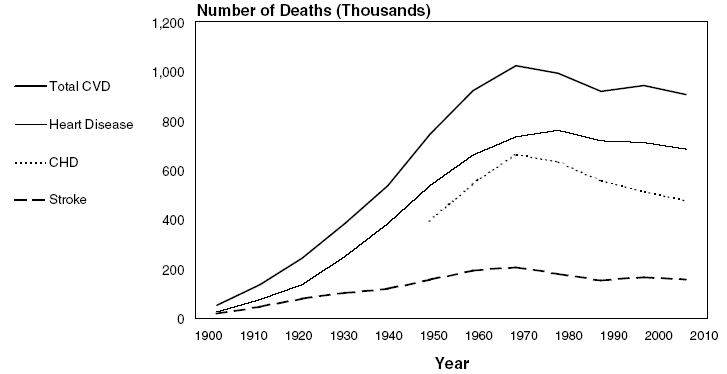 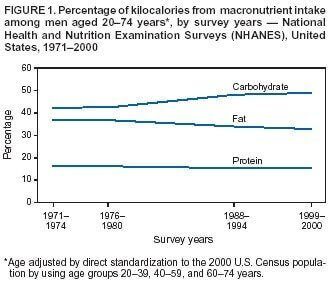 Since then, some studies have shown that those with the lowest cholesterol are more likely to die of heart disease (and vice versa). 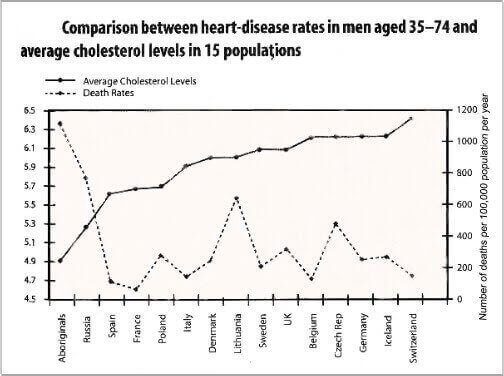 So then, what actually causes heart disease?

There are still many theories, and most actually come down to nutrition, or lack thereof, rather than genetic factors or cholesterol levels.

For instance, one study in the 1940s and 1950s found a strong correlation between consumption of sugar and increased inflammation throughout the body, including in arterial walls (a major risk factor for cardiovascular episodes). Recent studies are showing that fructose is perhaps more dangerous than regular sugar. Interestingly, consumption of sugar and high fructose corn syrup have risen at rather similar rates as heart disease: 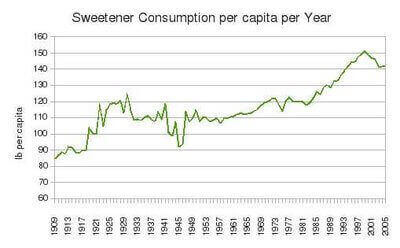 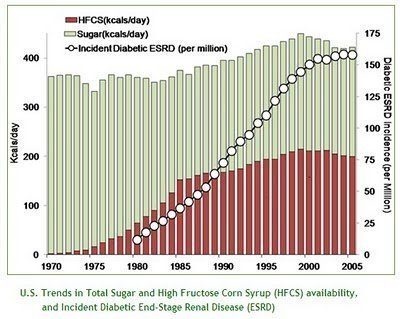 Other studies have linked deficiency of vitamins B6 and B12 (found in meat along with saturated fat!) and deficiency of Vitamin C to brittle arterial walls and higher risk of heart disease.

Perhaps the strongest correlation, however, is that between vegetable oils (you know, those “heart healthy” ones like canola, soybean, corn, etc.?) and increased instance of heart disease. There is more an more emerging evidence that supports this claim.

Vegetable oils are high in Omega-6 fatty acids, which have their place in the body, but if eaten out of proportion to Omega-3 acids, can cause some serious problems and inflammation. From this article:

The most important change in the American diet during the years of CHD increase has been the gradual substitution of vegetable fats for those of animal origin. Hydrogenated fats — in the form of margarine and shortening — have replaced butter and lard, while the consumption of vegetable oils has increased more than 10-fold. Since as early as 1956, a number of researchers have found that consumption of trans-fatty acids in hydrogenated oils contributes to heart disease, including most recently Mensink and Katan in the Netherlands, and Walter Willett at Harvard University. 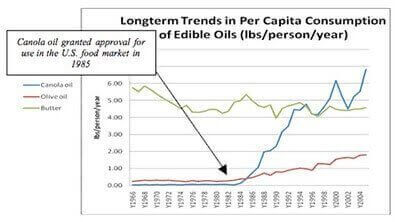 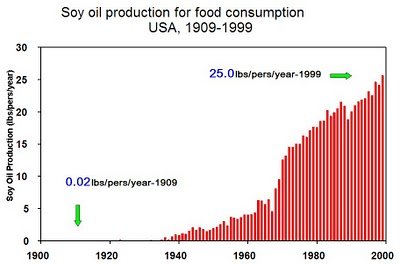 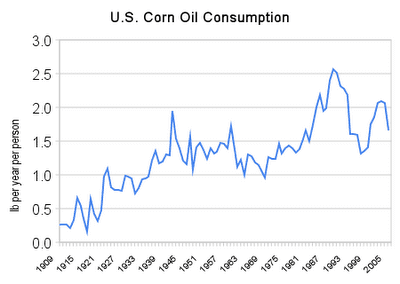 The imbalance of Omega-6 to Omega-3 fatty acids along with the fact that many vegetable oils are oxidized or hydrogenated, increases inflammation in the body, which can be a factor in increased risk of heart disease. These oils also contain the much feared free-radicals that can weaken and damage arterial walls. From the article above:

Arterial plaque contains cholesterol because the body actually uses cholesterol to repair injuries, tears, and irritations to artery walls. However, like rancid vegetable oils, cholesterol that has been oxidized by high temperatures and exposure to air can itself irritate the arterial walls and initiate pathological buildup. High temperature spray production of powdered milk and eggs, used as additives in many processed foods, began in the early part of the century. Consumption of both hydrogenated fats and products containing oxidized cholesterol increased greatly after the war.

A recent study found that excess consumption of omega-6 fatty acids, the kind found in commercial vegetable oils made from corn, soy, safflower, and canola, increases the amount of oxidized cholesterol in the arterial plaque. Like sugar and white flour, these vegetable oils, produced by high temperature industrial processing, are new to the human diet. It is the polyunsaturated omega-6 fatty acids — not saturated fat — that form the major fat component of arterial plaque, yet for many years the American Heart Association and many establishment nutrition writers advocated consumption of polyunsaturated oils for the heart.

Vegetable oils and hydrogenated fats were introduced in the early 1900’s, (1911 to be exact) and both vegetable oil consumption and heart disease rates have risen since then. It is important to note that these fats simply were not consumed before this time, because they didn’t exist!

Trans fats, which have gotten heat in most circles lately, are present in some forms of these oils/fats, and studies are showing a strong link between trans fat and increased risk of heart disease. These processed vegetable oils were introduced and touted for their potential to reduce the risk of heart disease compared to animal fats, but they haven’t done that. For instance:

While saturated fat gets the bad rap, there is a noticeable lack of studies showing a clear link between saturated fats (from real, unaltered sources) and heart disease or increased mortality. High triglyceride levels, on the other hand, have been linked to increased inflammation and resulting heart disease, as well as increased risk of diabetes and low HDL cholesterol. What causes high triglycerides? Glad you asked- a diet high in sugars and carbohydrates.

Grain consumption (especially wheat) has also risen steadily during this time period, and grains are in an entirely different form than they were a couple hundred years ago. The introduction of the stone mill allowed grains to be ground into much smaller particles that create more of an insulin response in the body and can damage the intestines. 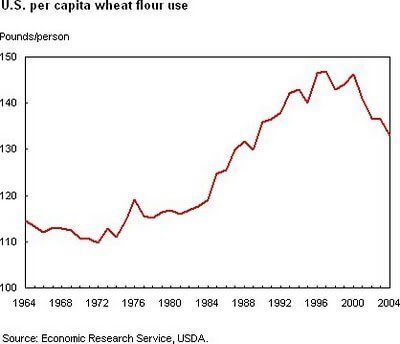 An important note here: since peaking in the 1950’s deaths from heart disease have dropped slightly, which researchers contributed to factors like decrease in smoking and better detection and treatment of factors leading to heart disease.

Though of course, correlation does not prove cause, the graphs above do show a strong resemblance between the rise in heart disease rates and the rise in consumption of products like sugar, vegetable oils, and wheat flour.

To solve the problem of high cholesterol, which we’ve just found is not necessarily a problem at all, Big Pharma has come to the rescue with statins: drugs that keep the body from producing cholesterol.

The problem is, that since we’ve shown that cholesterol doesn’t necessarily cause heart disease, and that cholesterol is necessary for cell regeneration, hormone synthesis and many other important jobs in the body, decreasing the body’s ability to produce cholesterol might be (and is) the wrong approach!

What about the cells that need regenerating? What about proper hormone balance? What about the body’s ability to absorb fat soluble vitamins? All good questions and all without answers from the manufacturers of these drugs.

To add insult to (lack of ability to repair) injury, statins haven’t actually been shown to reduce risk of cardiovascular problem or mortality at all! (Logical when you realize that cholesterol isn’t the problem). Check out this article for a breakdown of effectiveness of these drugs.

If the body doesn’t have and can’t produce enough cholesterol, it won’t be able to synthesize vital nutrients like Vitamin D, or produce hormones like serotonin, melatonin, progesterone, testosterone, etc., which can leave you depressed, having trouble sleeping, or with reproductive difficulties.

What Reduces the Risk of Heart Disease?

A lot of the factors that can help improve heart health and reduce the risk of heart disease fly in the face of conventional wisdom, but you are probably used to that by now!

For more on the real story behind heart disease, check out my interview with Dr. Mark Menolascino.

Your turn. How much cholesterol are you eating?