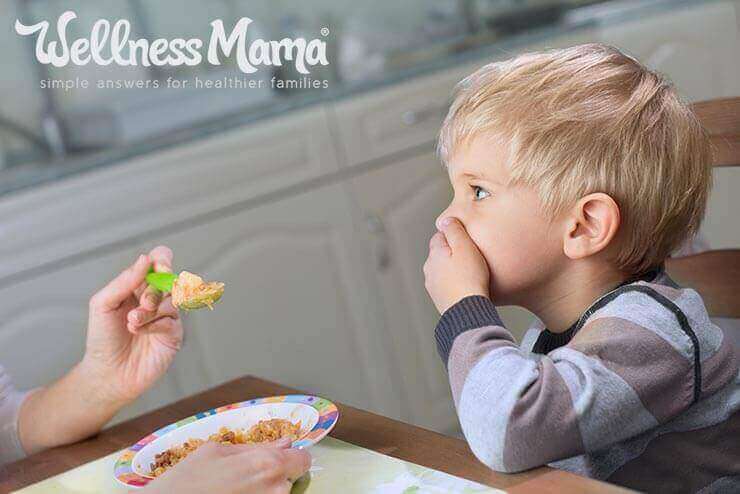 Dear Parents, We Owe it To Our Kids to Stop Picky Eating

Wellness Mama » Blog » Motherhood » Dear Parents, We Owe it To Our Kids to Stop Picky Eating

Stop what? Well, lots of things actually: We need to stop buying unhealthy foods, feeding them too much sugar, and not giving them enough time outside to play.

The thing that I’ve noticed in an increasing amount lately that we also really need to stop doing:

Letting our Kids be Picky!

Yes, I mean letting because we allow them to develop this habit. I’ve been to other countries, I’ve seen kids scarf down olives or snails or even balut (yes, really).

Let’s also not forget, as our parents were so keen to remind us, that there are children in the world who would be grateful for any food at all. I certainly heard about the starving children around the world when I wasn’t happy about eating my dinner. Do our kids hear about them?

In fact, I actually remember saving my birthday money once to donate to Food for the Poor because I actually felt bad about those starving kids.

Probably, but it encouraged me to save money for those in need and to eat my freaking brussels sprouts, so I’m grateful for it.

Parents in my parents’ generation also had a pretty set in stone menu each night at dinner. They served:

We were never forced to eat, but we most certainly didn’t get to choose what we were having for meals. We were *shockingly* expected to eat what was served. My parents didn’t seem to feel much sympathy for my plight of not liking certain foods.

In fact, when I saw this movie in theaters as a kid (yes, I’m that old), this line seemed somewhat familiar:

Most of the time, this included vegetables and wasn’t a food that I loved. But I ate it. And I didn’t complain. And now I’m all grown up and not a picky eater at all.

You Know What Else?

Most of us managed to make it through childhood without starving. We eventually learned to eat foods we didn’t like. We don’t even need therapy for it.

They also didn’t lose sleep over our food preferences.

Have our Kids Gotten Soft?

Let’s think about this. As kids, most of us ate vegetables. And meat, or we didn’t eat that meal. We made it to adulthood, and though I could argue it on a few points, most of us are relatively competent adults.

Yet, everywhere I go in the US, kids are coddled and catered to.

They are asked questions that I certainly never heard and you probably didn’t either.

“Do you want the Dora gummy bears or the Minions ones?”

“Oh, that’s ok if you don’t like that, we can make something else.”

“You don’t have to eat your meat and vegetables before having dessert… I’ll get it for you now.”

And those aren’t even the worst examples I’ve heard.

In fact, at a recent meal at our house where there were 18+ kids, all of the parents served each of their own kids food. (The food was amazing too- steak, grilled veggies, etc.).

I told the collective group of kids that there was fruit salad after dinner for everyone who ate their veggies.

One kid got upset and started complaining because “But mommy, I want fruit salad right now.”

At which point, he was catered to and given fruit salad by his parents without having to eat other food, in front of all the other kids who did have to eat what was served to them.

This is a small and insignificant example but it violates two social principles that I was taught as a kid:

Somewhere along the line, we started thinking that our kids get input into what they should eat. We forgot an important point:

Parents are Responsible for the Nutrition of their Children

This is a relatively simple concept but I don’t see many parents who seem to understand it.

That toddler is probably not even an expert at wiping his own bottom yet, but somehow we think we should give him input into his nutrition.

When studies increasingly show that the foods a child eats in the first few years of life are vitally important for lifetime health, we think we should outsource that decision to a three year old?

Are You Kidding Me?

Would we let our kids decide how often they should go to school? Or change their underwear?

What about deciding how much TV they should watch, or whether or not getting a pet tiger is a good idea?

So why are we letting kids dictate something even more important?

In a child’s eyes to not be given the food they want. It can also seem “mean” to give them boundaries and rules, but these things are necessary to avoid having whiny, entitled children who live in our houses until they are 40.

Will it Still be Cute Then?

Is it cute when a grown-up comes to your home for a meal and refuses to eat the meal you’ve prepared simply because they don’t like one of the ingredients?

I know a few of these adults, but I’m certainly not raising any!

Listen to this podcast episode on Umbrella Parenting and Raising Children With Strong Coping Skills with Dr. Jen Forristal.

I know, I know, I hear the objections now.

What about kids with allergies? Or special needs? Or disorders that affect their ability to eat certain foods?

Of course, there are exceptions to any rule and these circumstances dictate a little more leeway, but I have yet to find any condition that completely kept a parent from feeding their child any healthy food whatsoever. If your child has a condition that makes him allergic to anything but chocolate milk and cotton candy, I apologize, but I haven’t encountered this yet.

What I have encountered are many children who think they are a special snowflake with special privileges who get served special food.

I’ve also encountered a lot of obese kids. And kids with health problems.

And it Breaks my Heart

Because kids don’t buy happy meals on their own.

I know because I did it to my first child at a doctor’s recommendation.

And he was a freakin’ picky eater for a couple of years before I realized my kid was going to be an inconsiderate jerk when it came to food if I didn’t change something.

I think they call that parenting.

It certainly doesn’t mean I always have the answers (or even that I usually do).

But I do know this:

It took me a few months to help transition my picky temper tantrum pitching child to an adventurous eater who loves broccoli. I know it is possible.

I also know I haven’t had a picky kid since him. You know what changed?

Here’s a dose of something we aren’t giving our kids (or ourselves) very much: tough love.

As parents, we owe it to our children to help them become well-adjusted, healthy members of society. One of the many small ways we can do this is by teaching them the basic idea that food is for nutrition first and enjoyment second.

That we only get one body and we should take care of it.

And that it isn’t ok to live off of granola bars and chicken nuggets. That they will survive eating brussels sprouts and meat. And *gasp* even salads and olives and beets and every other food that we think kids won’t like.

Because at the end of the day… if our kids grow up fat, picky and sick, we have only ourselves to blame.

Important note: This post addresses the attitudes relating to food as much as the foods themselves. Of course, there are times and medical conditions when a varied diet may not be possible or recommended and these would require adjustment. I’m certainly not advocating that we force feed our kids or never give them any choices at all, only that we encourage an adventurous attitude toward trying new food and a kind and respectful attitude when refusing foods, especially after trying them. (For example, “no thank you, I’m not hungry” rather than whining and complaining). That is a manners issue and not a food issue at all. It is also something that every parent can work with a child on.

I wrote this post years ago about our guidelines for meal times and how we encourage our children to eat a variety of foods in case it is helpful for more specifics.

Frankincense Oil Uses and Benefits
Next Post: How You Can Help Save the Honey Bees